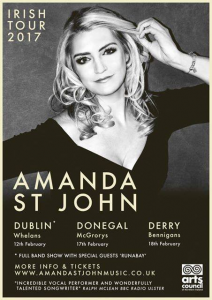 – How does your current style compare to the kind of stuff you used to cover?

I initially started singing Irish folk music in my teens but by the time I was in cover bands the sets were all very upbeat pop/soul/motown songs and we’d do pubs and wedding gigs mostly. I suppose I’ve taken the soul/motown influences with me and always include a few of these covers in the set.

– Obviously you can’t take the songs, but what can you bring from your cover band experience?

My cover band experience was a great way of learning the trade. Through years of gigging I’ve developed my vocals through practise and have learned the simple things of performance like stage presence, mic control and connecting to an audience. It’s also great at picking up song writing tips as these hit songs can help you learn song structure and how lyrics and melody work well in a song.

– A trip to Nashville seemed to inspire a lot of your work, too. What happened out there that had you writing so much? What was it about the place?

The people in Nashville are very open minded and encouraging and the place is just steeped in music so if feels so natural to just meet someone and then 5 mins later start baring your soul and writing/creating together. I was very lucky to get hooked up with some really wonderful writers and a couple of Grammy winners too. I was so nervous at the start that I wouldn’t be able to hold my own but I just threw myself into it as I didn’t want to waste the opportunity. 3 of the songs on the album were co-written in Nashville with Grammy-winning writer/producer Jon Tiven (Rolling Stones, BB King, Wilson Pickett). We just clicked and wrote (and recorded) 7 songs in about a week in between all my other co-writes. I was getting up at 5am every morning to prepare. It was busy but so rewarding!

– How did you find PledgeMusic to work with, and the process of fundraising?

PledgeMusic were brilliant to work with. The industry is changing so much that they kind of act like a record label for many up and coming as well as established artists and I found it to be a great marketing tool as well as the fundraising element. I was overwhelmed with the support and had orders from as far away as Japan and New Zealand!

Grow is a big production album with funky, soulful songs and grooves. Lyrically it’s very motivational and uplifting and deals with issues of life and love, overcoming self-doubt, negative thinking and ultimately using life experience to learn and grow from rather than being a victim of your circumstances. I feel like the production (Millbank Studios) and musicians involved are world class and together we have created an album that is fresh but also inspired by motown and soul classics. The rhythm section are fabulous and we’ve layered it with keys, hammond organ, horns, strings and gospel choir style backing vocals.  I’m incredibly proud of the album, particularly because it has been a long time coming but mostly because of the feedback from people as to how much they resonate with certain songs and lyrics.  It’s a very healing album.

– Was getting all the Australian advertising play quite strange, knowing that was happening the other side of the world? Did you get any Australian gigs out of it?

It was strange as I never got to see or experience the full effect of it. Retail chain Woolworths used my song Grow for their Rio Olympics campaign so there were a series of edits and adverts featuring members of the Australian Olympic team. They were played about 100 times a day between TV/Radio/Cinema etc. so it was a huge campaign. It would have been nice to see it for myself. It opened a lot of doors for me with publishers and venues and at one point I had started to organise a tour of the main cities but as the ad campaign only ran for the 3 months surrounding the Olympics I didn’t have time to get the proper PR and funds organised in the short time frame.

– You seem to have a lot of love for Whelan’s. How do you feel about headlining?

I lived in Dublin for 5 years and went to so many gigs in Whelan’s so I am very proud to be headlining my own gig there. I suppose that because of my journey and the fact that I only started my music career in my early 30’s I think I’m so much more grateful for opportunities like these.

I was lucky enough to receive a grant from the Arts Council NI for touring in 2017 so this year is all about reaching new audiences in the UK and Ireland and growing my profile outside of Northern Ireland a bit more. I’m just back from some promo gigs and meetings in London before starting into the 2nd leg of my Irish Tour. Then I have a UK headline tour in May and a UK support tour in August. I’ll also be doing Irish Festivals in the summer and at some stage I’ll be starting to work on my next album to be released in 2018. It’s gonna be a busy year!