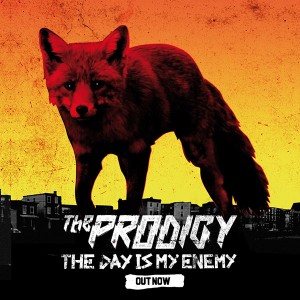 “We’ve always been into the escapism and hedonism of electronic music. I guess that comes from rave culture,” Howlett explains, agreeing that the escapist feel is the ‘ying’ to angers ‘yang’, though goes on to argue that politics will always be behind the band’s “feel” in terms of importance. “You’re probably right,” he says, “but it’s your job as a journalist to try and break it down and explain it.”

Despite the rave love in, the darker edges from The Prodigy’s sound transparently connect with very different genres. There’s a hint of grunge to the sound, for example, as well as nods to dance punk and hip-hop.

“I don’t hear any genre when I listen to music,” Howlett argues. “I only hear if it has fire or not, so I guess that’s why I’m open to what influences me. The foundation of all Prodigy tunes is always my beats and bass production. Without that, it isn’t The Prodigy. I can get as much out of listening to an Ennio Morricone soundtrack, to a Slipknot tune, to a Belgian techno tune.”

Elements of those sounds all come out live, with a show that’s traditionally been fiery to the point of abrasive, extremely heavy on the bass, and focused around frontman Keith Flint, who’s more than capable of holding an arena audience in the palm of his sweaty, lairy hands. The latest album, in fact, was written purely with live shows in mind.

“I will never tire of playing live,” Howlett says. “We’re always on tour. We’ll take a break for Christmas and then rock on late January, and I’ll be back in the studio to write a new four-track EP.”

“The album was written for one purpose – to play live. Since February 2015 when we started playing it in Australia, the album tunes have found their natural way live. Some have changed a bit and some are nearly the same. I feel lucky because we weren’t concerned about radio or anything else when we made this album, only playing them live because that’s the only place we know they will definitely exist. It was good to have that stage as a focus when writing.”

The pre-Christmas tour – including the Irish dates – feature hip-hop legends Public Enemy as support – but Howlett is making no collaboration promises. “We’ll have to see,” he says, referencing the bands’ recent mash-up. “It’ll be great to stand on stage and listen to them playing the tunes I grew up on. They were really the first band that meant something to me after The Specials.”

The band will be dropping certain tracks from the album in a live setting, especially ones that lack the personnel to deliver as The Prodigy would like. “As far as Ibiza goes, Jason (Sleaford Mods) has performed it with us a few times, but if he isn’t there, then we won’t do it. That tune is about his vocal, so it has to be him live with us, or it doesn’t get played,” Howlett says, adding that he thinks the Spanish party island the track is named after is “awful.”

The creation of the ‘The Day Is My Enemy’, released earlier this year, hasn’t been spread over the six years away from studio LPs. In fact, Howlett struggles to even recall how he’s spent the rest of the intervening time.

“The album you hear took just over a year to write and finish,” he says. “I don’t know what I was doing for the other five years, I can’t remember. We were touring a lot, but we always are. Sometimes when you push something it doesn’t work, so in a way I had to wait until the album wanted to start itself. There aren’t any tracks that are ‘notably’ absent. Any that aren’t on there weren’t good enough, so they were never tracks. Just things we tried live.”

Howlett also mentions labels in assessing the album’s progress, saying “I do tend to not get on totally with labels, because at the end of the day there’s always a slight conflict of interest between them selling a project and me keeping it creative. But I think both the labels we have been on have done a good job. I don’t think any major record label would have put up with a band like us and the way we operate.”

“Our music has been attached with certain things/ events in various countries in the past,” Howlett explains. “Some of them have great importance to us when we meet these people and they tell us, for example, Firestarter was an anthem for them when a certain crisis what kicking off in their country. That meant something to us.”

“I think what you hear in the music is probably a good description of me and the band. I’ve always responded to music that has an attack or a sly edge, so that’s what I’m in it for,” Howlett concludes. “I’m not an angry person. Moody bastard describes me better. I like music that wakes me up. It’s a punch in the ribs with a sarcastic smile.”

As published on GoldenPlec.com, November 2015