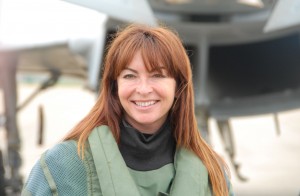 Former Gadget Show presenter Suzi Perry has signed a new deal to front Formula 1, it has recently been revealed. Perry, who is available for booking through talent agency MN2S, has extended her contract until at least the end of this year with BBC Formula 1 contract meaning that she may not be able to join Top Gear full-time.

It was previously rumoured that she would be joining the motoring programme earlier this month, leading the show’s new line up after Clarkson was axed following a fracas with a producer. Suzi Perry is best known for covering MotoGP for the BBC for 13 years, The Gadget Show on Channel 5 for 9 years, until 2011, and the BBC’s Formula One coverage from 2013.

Speaking about the possible presenter changes on Top Gear, Perry informed The Sunday Times, that, “They want to refresh it and make it different. I think they’re looking at having a gang of people rather than a structure of maybe two to three presenters, more of a team to take it in turns.” She added, “I wouldn’t be able to do the long trips. There may be something along the way, but at the moment I really don’t know.”

She told the publication, “My name has been linked to the new series of Top Gear, for instance. For the record, I know that my name is in the mix, and I’m not saying I won’t be doing it, but there has not been an offer for me to be alongside Chris Evans, the main presenter.”

Perry now has a very demanding schedule and has recently revealed her work and home synergy, commenting, “My job as Formula 1 presenter means I’m away a lot, so weekends at home are very precious to me. It feels like we’re making memories when we’re together. After finishing work on a Friday, Bastien and I tend to head to our local pub, The Spaniards, near where we live in Hampstead Heath in London. We like having a nice meal and drinks there with friends’.

Suzi is not just a car enthusiast; speaking in interview she gave details about the joys of her daily life, “By Sunday, I’m feeling refreshed and we’ll go for a run on Hampstead Heath. It’s only three miles away from Leicester Square but there is that real country feel about the place. Lunch is a big Sunday roast affair – it’s my favourite meal in the UK. It’s a chance to get the family together and have fun. Growing food, cooking it and then eating it is a real passion of mine. On Sunday evening, we’ll catch a movie at home or I’ll be packing my bag to go somewhere. We like to give each other a bit of independence and do our own thing as we prepare for the week ahead.”

Other than her successes in the British media world Perry has also has had a successful international career as she spent 12 months in Japan working as a model, and as an advertising model following her return to Britain. She is also a known philanthropist, a patron of Promise Dreams (a charity based in her home town of Wolverhampton that was launched in 2001). Promise Dreams raises money for children who are seriously or terminally ill providing treatment, help and support for both them and their families. She is also a patron of the National Association for Bikers with a Disability.

When Suzi Perry is not capturing the hearts of car fanatics she can be found giving motivation talks and speeches, appearing at numerous functions across the country. To book Suzi for a corporate entertainment event or as an after dinner speaker, contact one of MN2S’s agents for details.