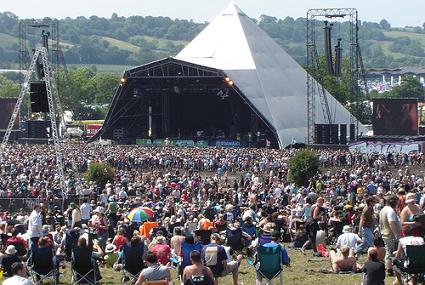 With over one million different IP addresses attempting to access an ailing website (things Glastonbury can learn from Irish festivals number one!) to purchase Glastonbury tickets back in October last year, Somerset’s greatest party is undoubtedly one of music’s most important symbols. It’s a place with a near mythical status, home to secret gigs, massive headliners, rising stars and epic all nighters.

I grew up an hour down the road from the festival, so I have a natural bias, but having relocated to Dublin I do everything I can to attend regularly and keep up my connection with the event. This year will be my seventh time.

I’ve seen Paul McCartney headline. I’ve seen Radiohead and Pulp play secret gigs on almost insultingly small stages. I’ve camped in the thick mud and the scorching heat. The festival even made up the second part of my honeymoon. There’s a reason I keep going back. I won’t give you the ‘greatest show on earth’ blurb; is anyone really in the position to pass real judgment on that, after all?

What’s certain, though, is that despite certain Irish festivals taking ideas from Pilton, they’ve got a lot to learn from the uber-fest. Here are a number of areas where they’re way short of the mark…

1. Seeing festival basics like food and beer as a commercial opportunity winds up punters.

And that’s before we even get started on those who can’t even do commercial opportunism well: festivals that only sell beer at the bar, or have no non fast food options. No glass is a common sense policy that we can all get behind. No bringing your own beer inside all or part of the festival is nothing but blatant commercial exploitation.

At Glastonbury you get checked for glass on the way in, and then waved through, whether you’re carrying three cans or three crates and a Miwadi bottle full of vodka. You can consume them in your tent or in front of the main stage, because, you know, we’re adults. You can bring your own food, and as a result the on site caterers have to be at least moderately competitive price wise (and there are still massive amounts of them). And if you are going to buy your own food/ drinks, they’re priced sensibly and contain interesting varieties, like locally brewed cider, hog roasts, frozen yoghurts and on-site coffee houses.

Yes, I’d definitely pay another tenner on the ticket price not to have to drink overpriced muck from whichever commercial partner has paid to occupy the captive beer market. Or at the very least to force them to offer some kind of range. Sort it out!

2. An ‘arena’ is unnecessary and inconvenient.

Especially once you get rid of the above. Where does the idea that music and camping needs to be separate stem from, if not from an opportunity to rake in more cash? Castlepalooza and Vantastival have managed perfectly well without the division.

Save on the second layer of fencing, give yourself more space between stages to reduce sound interference, make ‘popping back to the tent’ a more feasible endeavour that doesn’t involve being felt up by security, and even reduce theft by having more people sat around camping areas throughout the day. That commercial separation is pretty much the only win an ‘arena’ area offers.

Like Body & Soul’s 2013 ‘beer can only be bought in the first time you enter the festival site’ rule. Sorry, what? What exactly is that intended to do other than annoy those who chose to put up their tent before they lug their cans inside?

The same festival’s post-event Facebook posts suggest it enforced its ‘no liquids inside the arena’ rule so aggressively that not only was water banned, but babies had their milk thrown away and children their juice. If we have to be that petty, would a smell not have cleared up the ‘smuggling of alcohol risk’? Even airlines are less rigorous.

4. Security are there for our safety, not too annoy us.

See above. It’s become clear that at most of Ireland’s large festivals over the past ten years (and most of the UK’s, too – I’m looking at you Reading, Leeds, V Festival, Isle Of Wight and Bestival) security’s primary role is not to protect people from harm but to enforce commercial interests and – in most cases – treat punters with utter disdain.

Nobody would tolerate being thoroughly searched, corralled, having non-dangerous possessions such as sandwiches confiscated etc. at a normal gig, or most other events. Why should we accept it at festivals?

5. At least try to introduce us to something new.

Music plus a field and some stalls does not a good festival make. Throwing a few flags in doesn’t help much, either. Your average major gig in Dublin has almost as much in terms of inventive scenery as Oxegen, or the Phoenix Park gigs. Sure, it’s wonderful having great music, but why not mix in something else?

Why not allow some local promotions of related companies, some well-connected charity campaigns (no, not chuggers, information) or an area focused on health or promoting the local music scene? A good festival has variety; the more imaginative the better. It’s not a stage in a carpark with a hefty entrance fee, no matter how good the acts are.

6. Does the party really have to stop after the last act?

At scarcely after 1am? Are weekends that most attendees have specifically put aside for late night debauchery and having a good time in need of such a specific schedule and enforced closing time? Silent discos and tiny late-night stages have gone some way to fixing this, but late night options remain a touch on the pitiful side at most Irish fests.

Glastonbury beds down between 4 and 7am, with numerous on site clubs and outdoor dance arenas, as well as areas designed purely for wacky late night theatre/ circus skills. Even if that only means selling a little extra food, it’s a commercial win, and punters love it. With the largely isolated locations of major Irish festivals, it has to be logistically possible…

And not just as acts; let people run entire stages. Sure, we’ve seen a little of this recently, not least with Goldenplec’s own associations with Life Festival and Vantastival, but wouldn’t it be great to hand over showcase stages to arts collectives, circus troupes, political speech makers and debate groups?

Glastonbury does it as a matter of course, and it makes the festival educational and adds a depth that lifts it beyond a gathering of musicians. Give a stage in a small tent over to politics and let politicians actually try to connect with young people. Show us the best Ireland has to offer outside of music. Make it varied, we have plenty here to promote.

And that doesn’t just mean throwing a few flags up in the park. Knockanstockan, Castlepalooza and Body & Soul have the right idea. With the exception of small parts, Electric Picnic may as well be held in a car park. Oxegen was even worse, as are the Marlay Park/ Phoenix Park gigs, which use their settings about as poorly as its possible to do.

People vote with their feet when it comes to venues like The Academy 2 (Dublin’s venue where you have to be six foot tall or in the front row to see the band); it counts for festivals, too.

9. Prevent touting (it isn’t that hard).

Okay, this is more for big gigs then for Irish festivals these days (sellouts at the latter are all too rare), but the point stands. Pre-register for the right (not a guarantee) to buy tickets, together with your name and photograph. Print the same on the ticket. Require all entrants to bring photo ID. Set up a face-value re-sale system. It’s an idea Glastonbury have been running for years, and it’s been just as long since tickets regularly went at multiples of face value on eBay.

You’ll never please everyone – there simply aren’t enough tickets – but at least those precious entry slips aren’t being used to line someone else’s pockets. That’s a win for everyone except the illegal resellers, as the ticket market gets that little bit less crowded.

10. Do the above, and the loyal will stop fixating on the line up.

Electric Picnic seems to have Ireland’s most loyal festival following, but the lineup comes under thorough scrutiny year on year, and if they ever came up with a complete dud, that year might well be their last. Glastonbury’s built a reputation that allows tickets to sell out before a single act is announced, consistently.

Why? With all of the above – and, admittedly, the bonus of more than one hundred stages – we’re pretty much guaranteed a good time even if your tent’s a foot deep in water at the bottom of ‘I’ve obviously never been here before’ hill (seriously, don’t camp at the bottom of a hill. There’s a reason it’s the last place left). That the lineups are so consistently strong and offer so much strength in depth despite these early sell outs simply drives home that loyalty.

As published on Goldenplec.com, May 2014.