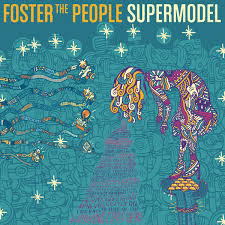 After all, Foster, recalls, “If it hadn’t been for my dad sending me to LA, I’d probably be sat in front of a computer designing a logo.”

Part of dealing with both the pressure of expectation and the change in personal circumstances came down to travel. After playing just under 300 shows in 16 months in support of ‘Torches’, Foster set off on his own, heading through Africa, India and swathes of Europe before settling down to write ‘Supermodel’.

Within his new opus, we find lines like “it’s hard to know the truth in this post-modernist view where absolutes are seen as relics and laughed out of the room” [‘Nevermind’], and a cover that subtly slams corporate America.

A lot of thought’s gone into the message of that cover, most of it Mark’s own. “All the symbolism and the layout of the album is Mark Foster. Then it was a collaboration with the artist, Young & Sick, the same artist who did ‘Torches’, and he made it look good, made it into a picture that works.

“It represents humanity; the selfish, self-serving side of humanity and the self-serving, population controlling, ugly side of humanity. Some of the chemical compounds that are on the cover are things like weapons grade uranium, agent orange and botox…”

The critique of the American corporate world and ‘money over morals’ decision-making becomes apparent with multiple listens, too. It’s not so much a direct lyrical critique as a general sense of malcontent blended with a multitude of American references; an album reflecting conflicted ideas Foster’s mulling over in his own mind.

“I believe in capitalism, to be clear,” he explains, “but I think capitalism needs to have a conscience. I think in my country, in the US we’ve been guilty in multiple circumstances of being capitalist without a conscience.

“I think that’s where you have to be careful, especially with things like the FDA, with what we allow in our foods, GM, trans fat, saturated fat, things that cause heart disease and cancer. But it’s allowed to happen because it’s cheaper to make something with high fructose corn syrup than with real sugar. That’s my problem with capitalism. And commercials like ‘four out of five doctors approve of hog roast’. You only have to put in enough money and someone will say smoking is good for you”.

Foster’s position seems to be a mix of idealism and realism, doused with a dose of the awareness of the well-travelled; a blend of the reality of his own prior experience chasing that American dream and the harsher realities it implies. “I don’t have a problem with selling records,” Foster says of his acts own necessary corporate angle.

“I wish we could live in a utopian society, where nobody had to pay anyone for what they did, and we could all just take care of each other, but the truth of it is, to be able to record a song that sounds good requires a lot of money. We all have to make a living somehow, and the album’s like ten bucks. It’s better than putting ten bucks of petrol in your car and driving down the street; you’ll never see that again!”

Nevertheless, Foster’s come home laden with darker angles and weighty opinions, and that increasingly world-wary view has crept into the music, too. ‘Supermodel’s opener ‘Are You What You Want To Be?’ – which references Africa both rhythmically and lyrically – explores the themes most openly, as well as taking in the singer’s own fears, with lines like “I’m afraid of saying too much and ending up a martyr, even more so I’m afraid to face God and say I was a coward.”

However, Foster argues, “I don’t think it’s really an angry album. It’s an emotional record, really melancholy at times, and joyful at others. I love to explore things that I’ve never written about before. I get bored pretty quickly, and part of what turns me on when I’m song writing is to try a style, a sound, an instrument, a rhythm.

“It needs to sound totally different to anything I’ve ever written before. We listened to some West African music going into this record. We’re quite attracted to that culture, and we blended it with a lot of ’70s stuff, like The Clash records. That’s the music we’ve walked out to for years. The rhythmic elements have become part of it, I guess.”

This kind of substantial change in style and direction is a risk the band is willing to take, under the heading ‘if things don’t work out, a single album was a privilege, anyway’. “I felt like the fact we got to make the first album was a success. Even if it had stopped at ten thousand copies, this was the time that I finally got to make music. The whole thing was exciting, as we went into it with low expectations really. We’ve been in rehearsal again, and it’s odd.

“There are two very different forms of being a touring musician. You’re home, and then you’re gone. I’m going to be gone for a year. I’m still trying to wrap my head around it a little bit. Tours are great and tough at the same time.

“We all have ‘Free Mago’ tattoos from our last trip to Dublin. They’re taken from our guitarist Sean’s nickname. He got roofied at a show, got sick and couldn’t play with us, so we wrote ‘Free Mago’ on a guitar amp as a show of solidarity. The tattoos came next It’s not easy to get back in that mindset.”

Touring, clearly, is a different kind of journey: Foster The People are about to spend a year travelling the world and singing largely of a very different year, also spent travelling the world. The messages come from the time away from the band, and they’ve a newfound depth but it’s not always important that the audience get that underlying meaning, anyway.

“People listen to music in different ways. I think the majority of people listen to the spirit of the song, the vibe of a song before the meaning of the song. It can take a lifetime to really get what a song’s talking about. It happens to me still.”

It happened with ‘Pumped Up Kicks’, too, with ample radio stations failing to realize that high school shooting association and leaving it one the playlist at less than suitable times.

Still, ‘Supermodel’s depths are still less accessible that ‘Torches; harder to fully grasp in a single sitting, or five. “When we formed a band, we wanted to make music for everybody,” LA’s must unlikely star professes. His new sound still has that warm, accessible buzz that drew in fans in such legions four years ago. What’s new is the depth to those dark, thoughtful undercurrents.

As published on Goldenplec.com, April 2014.