With debut album Serious About Men just around the corner, The Rubberbandits have plenty on their mind, not least the many different uses for plastic bags. Before our interview at Reading Festival, the Limerick duo teach a tent full of English kids about the IRA. During their set, they ramble incoherently about ‘yokes’ (i.e. pills) and claim to be a gilled human-fish hybrid. After the ‘Horse Outside’ furore, the conservative corners of Ireland are not going to like this…

The Rubberbandits have a reputation for being somewhat difficult in interviews. In fact, AU is grateful to have the chance to speak to the duo backstage at August’s Reading Festival, a location where they are virtual unknowns. At least it makes it a little more difficult for the pair to force us against a wall, or to throw us into a blacked-out jeep for an uncomfortable ‘tour’, as they have done to previous interviewers. Instead, Mr Chrome – the lanky half of the duo who performs topless and can’t resist a cock-swinging, on-stage rave – tries to smuggle large quantities of beer from the backstage cooler, while the marginally more refined and emotionally volatile Blindboy Boatclub seems to be having a temporary love-in with the English, and the ‘banter’ surrounding their show. References to the IRA feature significantly more than normal, and we can’t help noticing that the comedy tent has roped in a couple of extra security men just before kick-off. For The Rubberbandits, things really have moved on.

If you’d stumbled across The Rubberbandits seven or eight years ago, you’d have found a pair of internet heroes indulging in a few highly entertaining prank phone calls, not least one demanding that a bank pay compensation for a melted chocolate bar destroying their pants, or a long conversation with a shop clerk over the in-store disappearance of their rare imported bee. The comedy aspect might be as well-established as ever, but things are solely music now. Blindboy explains: “We’re too famous now. We wanted to be anonymous, but if we try and prank today someone will go ‘is that Blindboy’? And I’m like, ‘Yeah’, and then we’re there talking about how my mum’s doing.” 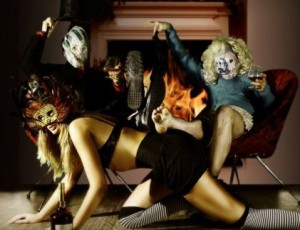 Instead, The Rubberbandits have fostered their sex-crazed, drug-addled bag-covered rap personas. The accents and obsession with party drugs are all part of the working class Limerick satire, but the plastic bags have a more practical purpose: “What do women love?” asks Mr. Chrome. “Shopping. What do we look like? Shopping. They love it. You should try it. You can’t go mixing your bags, mind. You need your mask bag, your pill bag, your glue bag and for your ladies your handbag, you know what I mean? They are 22 cents a time so we knit them out of nylon. We do want to wear them, for the ladies, but we actually have to. What people don’t realise, right, is that we’re really fish. There’s a layer of water on the inside of the bags that we need to breathe through our gills. The ladies love a bit of fish.”

The move to Dublin – their success largely due to a slot on RTE’s Republic Of Telly – proved a ‘Bandits turning point. As Blindboy tells it, “We love Limerick, but needed a bit of a holiday, so we got an eight-man tent on the roof of RTE. There were all these lads on the roof of RTE, so they just put us on TV for the laugh. We were living off pigeons, and they gave us canteen vouchers.” Next thing they knew, the ‘Bandits were producing guides to cities, and singing about (their version of) the Limerick lifestyle to the masses.

Around the time their breakthrough single ‘Horse Outside’ came out, The Rubberbandits were ‘unmasked’ by a photographer from The Irish Sun, who followed them back to their hotel after an early show. The ‘Bandits clearly dislike the man, but Mr Chrome claims innocence. “What did he want to go and do that for? He got it wrong, though. He said he did it by checking our shoes. Does he think we’re dumb, like? We gave our shoes to a couple of Russians. We already told you, we’re fish. We can’t live without our Raps bags [they’re not Spar bags, they’re just on backwards], so it can’t be us.” 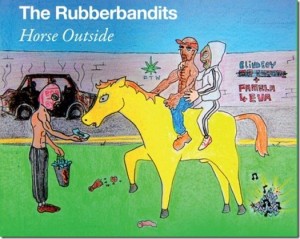 A few of the tracks that will appear on Serious About Men have been doing the rounds for a year or more as part of the live set. Blindboy Boatclub sums up the prevailing themes as “friendship, hawks and friendship with hawks. Friendship with everyone really. Even the English. But not Danny Dyer. We hate Danny Dyer. He’s a knob. Tell him if you see him that we’re gonna wound him.” The wounding will involve a headlock and a bout of mocking his masculinity, if the latest round of lyrics are anything to go by. Rap comedy doesn’t require a lot of musical comparison, but The Rubberbandits’ descriptions are predictably silly. “If you’re going to compare it to something, compare it to your grandma’s shopping.” That doesn’t give us a whole lot to go on, but there are always hints. Our interview came before recent single ‘Spastic Hawk’ had emerged outside of The Rubberbandits’ studio, but the newfound emotional edge is still implied. The words “We’ve got a hawkery” even make an oblique appearance in our chat.

There is a philosophy, though. ‘Horse Outside’ might feature on the album, but the change of direction represented by the mellower, satirical-melancholy comedy of ‘Spastic Hawk’ isn’t entirely coincidental. “We might have invented rap,” Mr Chrome argues, preposterously, “but we need to keep making things fresh, things that we like, you know what I mean? The album’s not going to have anything about cows outside, or goats outside, or hawks outside. We don’t really care if people like it, as long as Danny Dyer hears it. You know what I mean?”

And international appeal? “People already love us in England. We’re all about peace, you know? What’s not to love about songs about the ‘RA? We just have to make sure when we make it back to LA, Ice Cube’s fecked off on tour somewhere. He’s in the ‘RA too. But he’s too affectionate. I love him, but the man’s just too much with all his come-ons. I hope people give us lots of money. Money’s the most important part.”

Getting a sensible word out of the Rubberbandits is an act that only Joe Duffy – who hosted a very eloquent defence of ‘Horse Outside’ from Blindboy Boatclub on his RTE Liveline show – seems capable of. Novelty act or not, there’s little doubt that the duo represent the best vaguely rap-themed act ever to come out of the island of Ireland. They’re also so quick-witted that an interview is a constant battle not to lose the plot and giggle manically while they assault you with comments about what lives in the Liffey. Does the album represent the ‘threat to society’ that a few humourless souls have warned of? Of course not, but these subversive jokers should not be underestimated.

Serious About Men is out on November 26. 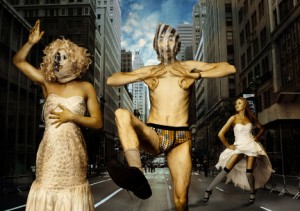 The Vandals – They might argue in a reasonably straight-faced manner that they’re a punk band – and they are, stylistically, at least – but The Vandals have 30 years’ worth of music behind them that suggests comedy is their centrepiece. See ‘14’, a disturbing anthem on counting down until an underage teenager’s sixteen birthday, and ‘Anarchy Burger’, a track that sarcastically aligns buying a burger with political outrage. At least we hope they’re joking…

Monty Python – The likes of ‘Every Sperm Is Sacred’ and ‘Eric the Half a Bee’ must have featured in more 3am sing-alongs than ironic renditions of Elton John’s ‘I’m Still Standing’. The TV show spawned more than a dozen spin-off albums, and introduced a trend for insane surrealism best summed up in that rendition of ‘Always Look On The Bright Side Of Life’ performed whilst nailed to a cross in ‘The Life Of Brian’.

The Lonely Island – Saturday Night Live stars with a phallic obsession, The Lonely Island are beloved across the pond for getting Justin Timberlake to sing about a ‘Dick In A Box’. They went on to rope in Lady Gaga, Michael Bolton, Nicki Minaj and a whole load more contemporary artists with the promise of lyrics like ‘Watch it girl, cos I ain’t your ‘Mr Nice Guy’, more like the meet you, take you home and fuck you twice guy’.

Bloodhound Gang – Having started out as a rap group not dis-similar to The Rubberbandits, Bloodhound Gang morphed into a nu-rock act singing on themes like animal and animal-style sex, drug trafficking and abuse, and the female anatomy. That’s before we even get started on their on-stage antics, which include a fixation with golden showers and plenty of perverted thoughts on Asian women. Just don’t stand in the front row…

Weird Al Yankovic – Al had us won over before he finished parodying the Backstreet Boys whilst rambling about what he’s bought on Ebay. Factor in ‘Don’t Download This Song’, a brilliant parody of Nirvana’s biggest smash’s indecipherable lyrics in ‘Smells Like Nirvana’, and Al’s habit of saying he’ll leave the serious stuff to the likes of Paris Hilton and you have a man as witty as he is funny looking, and anyone you’ve ever heard of is a prime target.