The heart doesn’t thump. It’s more like pum-POOM, falling at intervals of just over a second, and accompanied by the barely audible pressure of blood forcing its way into a ventricle. In here, it seems to beat at the volume of human speech, though it’s dramatically overpowered by the slight creek of a gentle raise of the arm in the darkness. My surroundings are such an empty nothingness that I can only tell for certain whether my eyes are open or closed by poking at the eyeball. Occasionally, without warning, an anatomical extremity collides with the invisible walls surrounding my half-naked body. It’s the gentlest of collisions, but its unpredictability sends a tsunami of shockwaves through the darkness, bouncing my floating body back into a seemingly static yet endlessly unstable state of suspension.

About 45 minutes pass, and I turn on the light switch. I’m floating in a salty bath in the blindingly

dark confines of what’s essentially a blacked out, nicely heated paddling pool. It’s intimidating at first, yet the kind of blackness that descends when the lights flicker out – fused with the deathly silence aided by ear plugs and the gentle two-tone beat of the heart – quickly evaporates any concept of time. Soon afterwards, the head begins to swirl with entirely un-stimulated randomness, spinning between complete consciousness and a day-dream state. After five minutes, virtual to-do lists and ‘thinking time’ are exhausted and overwhelmed. Sheer serenity, empty space and stress relief kick in: I’m floating in a carbon fibre tub in a central Dublin basement, but I could be anywhere, or equally, nowhere.

Flick the light switch over your left shoulder, and the flotation tank is a large coffin of stringy fibres, well-concealed filters and heating devices. Switch things back off, though, and its 24 square feet of nothingness, and lying back and letting yourself go feels strangely primal. The warmth of the lapping water and the throb of your own heart beat feel pure and embryonic, and if you can avoid checking your eyes still open and close normally – which doses them in salt water so oily and thick it’ll make swimming in the Atlantic seem like a fresh bath tub – it’s an hour of pure relaxation that feels like a good deal longer. With the facilities to wash off the rainbow layers of salt from the folds of the outer ear (and the rest of your now almost sedentary limbs) all laid out amongst a stunning hippie backdrop, the lightest knock on the flotation room door might sound like a hammer blow, but it won’t lift you from your dreamy state. Float on!

You can hear the faintest murmurs of your heart and slosh away the stress at the Harvest Moon holistic stress management centre, located at 24 Lower Baggot Street, Dublin 2. www.harvestmoon.ie

As published in The Social August issue, 2011 (click to page three). 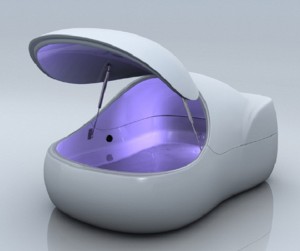