I wasn’t a cool teenager. I took my A-levels at one of those intensely conservative UK ‘grammar schools’, a place where late teens are forced to wear a suited uniform that prepares them for their anticipated future as the nation’s politicians, insurance salesman and – heaven forbid – bankers. We lived in a fiercely white, ferociously middle-class corner of rural Wiltshire, where – in the late ’90s – punk was still making its way down the tracks from ’70s London, and urban music was a concept so foreign that ‘Crazy Town’ actually seemed fresh. Like most teenagers, we had our own limited form of rebellion.

Cruising the backstreets in my friend’s ancient, lowered, alloy-wheeled Fiat Uno when we should have been in Chemistry class was about the height of things. Our livelier evenings were made up of underage drinking in the cemetery outside the local arts centre, if we could obtain the alcohol. Local musicians of limited talent combined the trumpets they played in the school band with a few chords on guitar, and quick as a flash, an entire generation of rural gig-goers became huge ska punk fans. In that shiny-rimmed, decrepit old Fiat we listened to only three bands. Rancid were the angry, political, edgy punk monsters who we dreamed of seeing smash their guitars across the art centre’s stony floor. An obscure American ska band called The Gadjits fell at the other extreme, fixated with nothing more than bouncing like idiots, singing about juvenile delinquency and bouncing like idiots some more, only whilst on top of various different women. Less Than Jake – a sizable group of Florida based musical miscreants – fell nicely in the middle. They summed up the feeling that there should somehow be more to life than middle class rural boredom with tracks like ‘Is This Thing On?’, and caught onto the teenage tendency towards misbehavior in tracks like ‘Sugar In Your Gas Tank’. They were, in short, our idols. 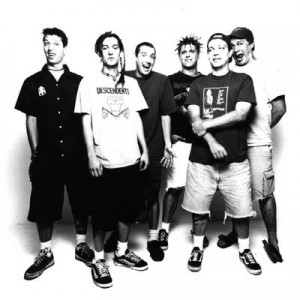 Since then, Less Than Jake have always run through my life. I once saw them play five dates on a single UK tour, culminating in a sweaty London basement, where my friends and I clung to a huge banner that read ‘I Stalk Less Than Jake’. At that final show, guitarist Roger came out and presented me with a plec that’s still sat in a cupboard back at my parents house long after most of my other teenage tat has been thrown away. Earlier that year I drove my parents classic Morris Minor into the back of a Transit Van on the way back from another Less Than Jake show, and spent an entire miserable summer paying the damages. Then, on my very first day of university, a guy walked into my room because I was blasting ‘Faction’. He’s still one of my best friends, and the song’s already been requested as a teenage throwback from the DJ who’s playing my up and coming wedding.

To say I’m ‘all grown up’ now is probably a fallacy, though I no longer drink in graveyards or risk my life in appallingly driven Fiats. These days, ska punk rarely finds its way onto my stereo, and even the Less Than Jake album I consider to be their seminal effort, the critically unheralded Borders And Boundaries – an album I’m on my second copy of because the first became so scratched from overplaying – hasn’t graced my stereo for perhaps six months. Having said that, their music will always be part of me, and the opportunity to interview long-time saxophone player Peter ‘JR’ Wasilewski was one of those pipe dreams that got me into music journalism in the first place. For the band’s up and coming Dublin show, I’ll be on my honeymoon. By my reckoning, it will be the first Less Than Jake show taking place in my town that I’ve failed to attend in well over a decade. They say life moves on; and I’m delighted with the way mine is about to. When it all meant so much to me, though, finding out what it meant to the band was a unique opportunity. Here’s JR’s take on the ten key points that – for me at least – make Less Than Jake that little bit special. They’re the same concepts that the band represented all those years ago:

1. Thou shalt not take yourself seriously… “The new release, TV/EP, is not really a release. I mean it’s being promoted as a release, but we just did it for fun. If people don’t like it, so be it. We had ten months off touring, and we’d been talking about doing it, so it was just a way to make use of some ideas, get back into things and have some fun. It’ll get a critical panning, people are too ‘cool’ to like it. It’s just something to listen to, a different kind of covers record, just TV theme songs.” 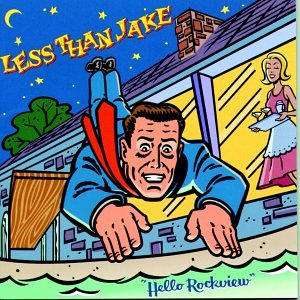 2. Thou shalt ignore authority… “You can do a certain amount of things on a normal label, but there comes a point when you get singled out and labeled for them. Having our own label means we just do what we want, no red tape. It’s harder to get media outlets interested in your band, competing against multi-million dollar companies. We don’t want people signing cheques for us, we don’t want to throw them under the bus, but there’s no use having someone else controlling your band. We want control. If that’s wrong, it’s wrong.”

3. Thou shalt experiment… “A lot of the things we do are just to see what happens. With the latest release, we know a lot of kids around the world might never have heard of Laverne & Shirley. You have to give the listener more, as you’re competing with ‘free’ these days. I read the other day that Reverb Nation registered its one-millionth band. That’s just shitty. I mean in a way it’s great, but there are a million shitty bands out there, mine included. There needs to be a theme, a well thought out package.”

4. Thou shalt ignore the mainstream… “I listen to the radio occasionally when I’m in my car, but I just don’t care what’s popular. I was stoked with myself the other day when I recognized a Rihanna track”.

5. Thou shalt make yourself collectible… “All these indie bands keep putting out tapes, but it’s pointless. Let’s be honest, who has a Walkman? The hipster, idealistic thought of releasing a record on a cassette just seems like trying to be cool. Unless you’re one of those people who wears glasses that are just frames, you’re not going to have a Walkman. CD collections are getting smaller and smaller. The only thing left is vinyl. It’s artwork; it’s big, and it’s collectible. The nuances are great, it’s a better listening experience. There are always going to be collectors who buy it. There are only three people who own every release our band has put out, that we know of. Two of them are in the band. I know what I don’t have, and it’s a lot.”

6. Thou shalt play live like your life depends on it… “You have to connect with your fans somehow. There are new, younger people at every show, as well as our older fans. There’s always someone seeing us for the first time. Without the fans, we wouldn’t exist. It’s symbiotic, and I like to hang out. Circle pits, the skull man, ‘the wall’… our fans are crazy, and we want to make sure they have a lot of fun”. 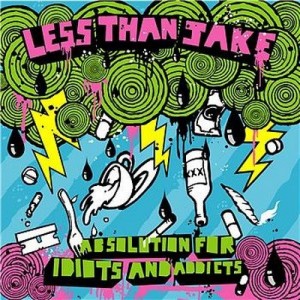 7. Thou shalt mix it up… “There’s no point in staying static, and putting on the same show every night. We like to change things up on a day-to-day basis. We have the ‘hits’, the songs we know are popular from each album. It’s tough to pick, though. We have dozens and dozens of songs rehearsed for every tour to choose from. At any one time we could be picking from 60 or 70 tracks we could throw in to the set list.”

8. Thou shalt keep your feet on the ground… “If Less Than Jake could be remembered for one thing, I’d like it to be for not being assholes. Or for being the band that opened the door to a lot of other bands, and taught them how to be a band. We took out a lot of bands that have never been on tour before, and some of them have gone on to be much bigger than us. That kind of stuff means a lot. I wouldn’t say we’re not a successful band, we’re able to continue to be a band, and I’d consider that very successful after 20 years.”

9. Thou shalt make the most of what you have… “We’ll keep going until someone gives up, until someone says I can’t do this anymore, or until people stop coming out to see us play. We’re having a fucking great time. Why would we stop? I don’t know why we’ve lasted so long, honestly. Maybe it’s just the reaction that happens when we’re on stage, it’s real and it’s special. Some bands don’t have the same spark. We’ll play the same way if there are eight people or 80,000. We genuinely have a good time, the shows are the highlight of our day.”

10. Thou shalt appreciate what you have… “We’re so lucky that we can still make a living doing what we love; that so many people still care about what we, as a band, do. Some days I’d rather be doing anything, but being on tour is still who we are. That’s where we thrive. We love performing with each other and we love performing for you fans.”

As published at State Magazine and Goldenplec.com, June 2011.