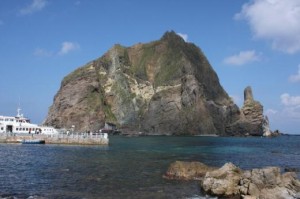 Dokdo – 85kms East of Ulleungdo – is an extremely hot political issue in Korea right now. Japan and Korea have a lot of bad blood between them historically, so it’s understandable that when the Japanese make a claim on a small island that has always been historically Korea’s the locals are pretty quick to point fingers. The debate has been raging for years now, but become a whole lot more intense recently, fuelled by the Japanese argument that they briefly owned the island in the early part of the century (it seems to have escaped their notice that they only ‘owned’ it because they invaded the whole of Korea) and the fact that Dokdo is closer to Japan than Korea.

It sounds (and in all honesty, pretty much is) a load of fuss about not a whole lot, but considering we were relatively close, and that I’ve spent more classes discussing the rock than doing almost anything else over the past few months, I just had to see it.  The small collection of rocks takes about two hours on an extremely rocky little ferry to get to. Speeding away from Ulleungdo is quite a sight, then for nearly two hours there’s nothing to see in any direction except for beautiful turquoise sea and horizons.

How people made it to Dokdo in ancient times is quite beyond me. When we finally arrived there we learnt just how small the collection of rocks actually are. Two major rocks shelter a small harbor in the middle – a place where it is only possible to land for around 50 days per year. We were lucky enough to be able to leave the boat and wonder around amongst the heavy Korean military presence in the intense sunlight. There is one house on Dokdo. An old couple live there, forming part of the Korean claim to sovereignty. Other than that, there really is nothing much to see. Just about worth the four hours on a boat to say I’ve been there. The look of awe in my students’ eyes is quite amusing – apparently going to Dokdo makes me all but Korean! It remains to be seen how my Korean habits go down back home in a few weeks, I’m thinking it’s going to be a little strange! 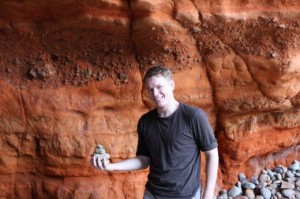 When we arrived back in Ulleungdo it was time for an island bus tour. Ulleungdo has a perimeter of only 56km, so it was easy to go around the whole thing in just a few hours. We made some really odd stop offs – bright orange rocks in a cliff side, a metal stairway clinging extremely unsafely to a sloping cliff side, and a museum that seemed to focus entirely on odd looking gemstones and had a centerpiece of the biggest clam shell I’ve ever seen. The meat from the clam would have been literally the size of a Christmas Turkey. The scenery was often spectacular, though Korea has an amazing ability to blight the most beautiful of views with ugly buildings and large blocks of concrete, which somewhat marred an otherwise excellent experience.

Of course, Koreans are never content with just offering some odd tourist attractions. The bus has to be an attraction in itself, blaring an endlessly repetitive loop of badly written cartoon music, complete with rainbow lighting and optional microphone, in case anyone should deem it necessary to add their voice to the sensual assault. No wonder everyone flooded out of the bus for even the most unexciting of sites!

The tour ended in the islands central crater – the one area of flat land left on Ulleungdo, a hollow that is home to the islands only farm land and a host of traditional buildings. The (for once) unspoilt scenery provided a perfect backdrop to the wooden roofed buildings, which were piled with seemingly random rocks to hold on the wooden planks during storms. The inside was simply a compressed mud floor and unstable feeling segregating walls that seem to be there as much for structural support as to create rooms.

By this point checking out the local wine seemed a good idea. Maekkeoli is infamous amongst Korea’s foreign community. The slightly sour white fermented rice drink is politely referred to as ‘rice wine’, and has to be forced down with a certain amount of ‘this is a cultural experience’ rather than enjoyment. The islanders seem to have come up with a great alternative, however. On top of the usual fermented rice a sprinkling of grated carrot and rice cake were added to the already thick liquid, and –as if my magic – an almost palatable concoction seems to emerge. Now why didn’t we think of that?!

Sarcasm aside, Korean package tours really are an incredibly amusing experience. Sheer quantity of entertainment regardless of quality seems to be the emphasis, but it’s all done in an amused and high-spirited way. Just never, ever do the same thing twice!

Ulleungdo is so clean and relatively untouched that almost all the rivers and streams provide drinkable water. A theme for the weekend seemed to be the endless supplies of new and different flavoured waters that had passed through various different local rocks. Somehow these even included a heavily carbonated metallic tasting treat (why is that despite never having eaten the stuff, everyone knows exactly what metal tastes like? Very odd!). The metallic aftertaste made the perfect excuse for needing ‘something to wash it down with’ so Ulleungdo evenings were spent sipping local alcohol on rocky Cliffside paths and staring out at the brightly lit squid boats on the horizon – beautiful.