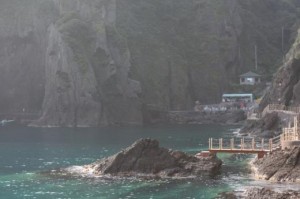 I’d heard good things about Ulleungdo. Damn good things, but then I’d have had to: I can fly home in twelve hours. Fair enough, the flight would be quite spectacularly more expensive, but if I’m going to travel for twelve hours there’d better be something worthwhile on the end.

Fortunately, in this case, there very much was. Even the approach to Ulleungdo is stunning. The harbour is hidden from view in a cove, and can’t be seen in amongst the towering rocks, so on arrival your convinced until the last moment that the ferry’s going to be smashed to pieces against the cliffs. The whole island is tall and imposing. With the exception of two or three small beaches, the entire coast rises straight up from the sea, high enough into the sky above the turquoise water that in most places even contemplating getting into a boat is inconceivable.

After arriving and dumping our stuff at our extremely dubious looking hotel (cheap tours in Korean mean Ondol – heated flooring – which is only comfortable when you have fifteen blankets and someone to hold!) we went for a hike. The biggest village in Ulleungdo – our home for the next three days – is extremely squid focused. Gutted animals hang drying from every available spot, restaurants almost all serve the local delicacy and most of the boats in the harbour are hung with long lines of blinding lights to attract the slimy creatures into their nets. The local women work the markets while the men are out fishing, and have acquired and incredible ability to take a live squid and reduce it to the edible constituent parts in a 10 second flurry of knife strokes, leaving the tentacles are still wiggling away on the plate in front of them. The fishy stench of death and well-practised strokes are strangely fascinating.

Away from the gentle bustle of holiday season in what must be one of the world’s smallest harbours, we drift around a bend on to a stunning Cliffside pathway. With walls of rock towering over the path and a sharp drop into the sea below, the rocky trails appear to cling desperately to the side of the island in a way in which a single gust of wind could take them away. I wouldn’t like to try out Ulleungdo in a storm – I suspect it feels like exactly what it is – an unprotected rock in the middle of a vast expanse of water. Following the path way round we reach a series of metal bridges, perfect places to leap from 3 or 4 metres up into the clear waters below. 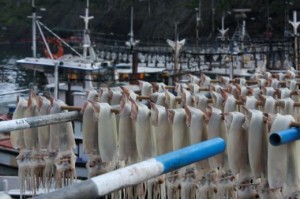 Swimming in Ulleungdo is heavenly. Although the water is deep immediately off the side of the cliffs, you can see far enough down to watch the fish swimming around under your feet and swim drift over huge towering rocks on the bottom without even coming close to touching them. If you tread water for a while you find yourself surrounded by yellow and black striped fished about 2 inches long, which nibble on your body (I must be covered in parasites, as apparently that’s what they eat!).

It was all going wonderfully until I climbed out of the water to jump from the bridge again, and managed to push myself up using a Sea Urchin. After picking a small black spike from my second toe I spent the rest of the weekend limping around and swimming excessively in an attempt to avoid infection (bad theory, as it failed miserably: swimming keeps the cut clean when there are no pharmacies open due to the holidays. It looks cleaner but feels worse!).

Anyway, swimming and almost-through-the-toe spiking over, we followed the path round further to a lighthouse, through a bamboo grove and up to a fantastic hilltop viewpoint, from which we could see most of one coast of Ulleungdo and more clear blue water than I’ve seen since Thailand. I love this place!

One good view down, why not head for another one? For sunset we took a cable car to ‘Dokdo view peak’. Such is the Korean obsession with the small island 90kms away from Ulleungdo (see tomorrows entry) they name mountains after the occasional glimpse you can grab from the top of them. A rickety cable car took us directly through the trees to a wooden platform with a view of the sun setting prematurely over the spiky mountains to the West, and a view that was quite conclusively Dokdo free to the East. It was a sunny day, so clearly some kind of miraculously uber-clarity is required to actually glimpse the infamous rock. Never mind, tomorrow we’ll be getting a lot closer.

12 hours and a million miles from neon glowing Seoul, rural Ulleungdo is as close to paradise as anywhere in Korea has been. Rumour has it they have one English teacher… maybe I’ve found my retirement town!