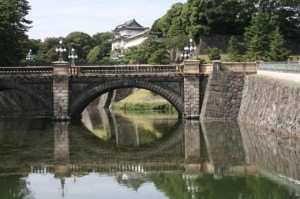 You can’t visit Tokyo without visiting the Imperial Palace. Or at least you’d assume so, but in reality it really doesn’t make for much of a tourist site. A whole park is set inside the outer moat – which is accessible by more subway lines than even the park warden could probably name – and the Imperial Palace occupies a small corner of it. Unfortunately it’s almost completely inaccessible. Though there is a beautiful view of the palace’s cliff side location from a beautiful arched bridge, the closest you can get to fairly unimpressive looking white building is too far away to even see the architectural detail. Definitely something that needs to be sorted as a tourist attraction.

What better way could there be to overcome a disappointing attraction than a beer museum? Tokyo’s second most infamous alcohol export (after Sake!) is Sapporo, a heavy tasting lager that’s sold in huge distinctive silver cans. The brewery is bang in the centre of Tokyo.

After negotiating Tokyo’s mind boggling subway system once more (seriously, this thing has about 20 lines. That’s really not an exaggeration; the subway map is so complex it often needs to occupy an entire wall on the station just to be clear. There are also different subway companies operating different lines, and they each need different tickets. Truly ridiculous!), I arrived outside a European brick style building in the middle of a shopping centre.

Not quiet what I expected, but the inside was so crammed full of beer and anything relating to it that the oddly un-Japanese exterior was soon forgotten.  Japan seems to be far less foreigner friendly than Korea, and the museum was a good example: not even the slightest trace of English. Seeing as my Japanese doesn’t stretch much beyond Sayonara (let’s be honest, it doesn’t stretch any beyond Sayonara… ) it was really a case of just having a look around. 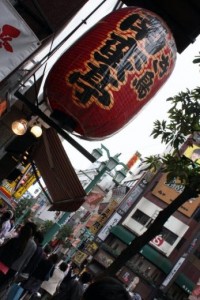 Fortunately the final part needed on introduction: the tasting room. For a mere 400 Yen, a tray of Sapporo’s varied selection of beer and some crackers sat in front of a huge fermentation vat was a peaceful way to pass the early afternoon. Sapporo is definitely one of those beers that taste better straight from the factory, and they also offer a surprisingly good white beer. All the beers provided are described by the accompanying information (the only thing in English!) as being of English of German origin, but they don’t taste quite like anything from back home.

Outside a kind of Origami promotion was taking place. An older guy gave a televised performance, turning a metre square sheet of paper into an immaculate brown wooly mammoth. The whole process took less than fifteen minutes, which apparently is a requirement for ‘legitimate’ Origami. He must have made at least a thousand folds in that time. The process was fascinating to watch, though I still have no idea what the live commentator could possible have been rambling on about for the duration of it.

Time for one more stop; I pick out the Shinbuku district as a decent place to check out some lively shopping and also get back to the airport quickly.  I quickly stumbled across a Pachinko room, so had the chance to indulge in the odd Japanese form of gambling that I’ve been reading up on over the last few weeks.

The game involves dropping metal balls into a kind of slot machine, which gives out a whole load more metal balls if you win, though exactly how you go about winning was totally lost on me (I did manage to get some metal balls, but I have no idea how!). Some of the locals seem to sit there for hours, and have trays and trays of the ball bearings sat behind them in a huge heap. It’s technically illegal to gamble in Japan, so in order to claim there winnings the gamblers have to claim a gold coin, which they then exchange for cash in the shop next door. A clever technicality to avoid the regulations, though not one I ever came close to using, having lost my $10 ‘stake’ in about 10 minutes.

Just enough time left to grab a quick fried shrimp and seafood noodle soup before the long trip back to the airport.

These two-day trips really are ludicrously fast paced. It’s little more than a taste of a city, but with both Tokyo and Taipei, that taste has been enough to make me think a return trip is worthwhile. Maybe with Tokyo it would have to be a job, on any other countries salary the place is all but unaffordable!

I’m off to enjoy my final few days in Korea, it’s about to get very emotional…