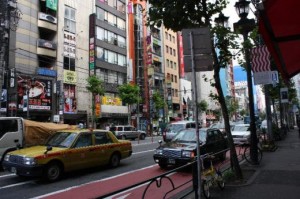 Takeshita Dori is all about being seen. Japanese teenagers are painfully fashion conscious, and fashion here means something completely different to the rest of the world. Even negotiating he maze that is Omote Sando subway station, there are young girls posing as human replicas of cartoon characters on every corner, complete with inch thick make-up and wacky cartoon hairstyles. The ‘CosPlay’ (costume play) trends are taken extremely seriously, with hand-produced outfits that are so perfectly matched to the real thing they could have been taken straight from the wardrobe of the cartoon character in question.

This kind of quirky can only make for an interesting district, and Takeshita Dori us just that. Though the main road alongside Omote Sando focuses very much on designer labels, Takeshita Dori itself is a treasure trove of independent stores selling anything you’ve never seen before. There are the inevitable CosPlay outfit and comic books shops, which are hilarious to wander around, but alongside them are some even more odd places. An accessories store features the front end of a jet plane in the window, one store specializes in dressing dogs up in similar cartoon outfits, and a six floor 100 Yen store sells so much it almost undermines my ‘overpriced Tokyo’ argument. The whole district is tightly wedged into a handful of narrow alleys: Takeshita on a Saturday night must be one of the most claustrophobic shopping experiences in the world. 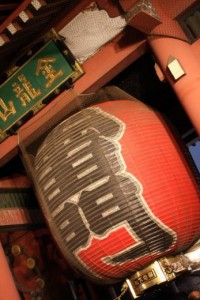 The shops peak with a real comic gem next to the subway station: CondomMania. Known as one of Tokyo’s most famous meeting places (meet you at CondomMania does have a certain ring to it… ) , the store is largely for novelty purposes, and is stunted somewhat by the necessity of labeling everything that can’t be used for it’s (apparent) intended purpose. It’s still well worth a trip though. Products (which are all exactly what you’d expect) include everything from the glow-in-the-dark to the nut-encased; the superman-shaped to the excessively undersized. Being of particularly undeveloped sense of humor, a small part of my bag for the trip back to the UK will now be filled with novelty latex, though I did resist the call of the full body costume.

Having temporary sated my desire for the ridiculous; it was time for some Sushi. At Japanese prices, I was a little worried by the potential wallet damage, but visiting Japan without sampling a good bit of Sushi would just be wrong. As it turned out I needn’t have worried: Sushi is too common here to be the kind of luxury it is elsewhere. You sit at a kind of food bar, and watch the imaginatively presented fishy snacks weave around a conveyor belt in front of you, perfectly laid out on a selection of colored plates that indicate the price of the Sushi they hold. The bar is full of sauces, tea powder and potent Wasabi pastes. Half a dozen plates through, my random selections lead me to pick out a seaweed wrap coated in a strange looking brown paste, which turns out to be the insides of a sea urchin. An otherwise wonderful meal was somewhat tarnished by the potent taste that half a bite left in my mouth for the remains of the evening: this stuff is probably why mouthwash was invented. The authentic Sushi experience, however, was unforgettable. 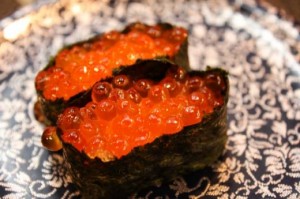 Tiredness made the Roppongi nightlife experience not quite what it could be, but the number of people hanging around outside the subway station gave a fair indication of the kind of carnage the district must usher in every weekend. A quick trip to Hard Rock Café showed just how many foreign residents there are in Tokyo (it has to be several multiples of the number in Seoul, despite Seoul’s US military presence). A beer starts at around $6 here, and spirals up to well over $15 for an import: a big night out somehow doesn’t seem quite worth the money next to Seoul’s $1 bottles of spirits, so I retreat at a relatively early 1am and await the day I earn a Japanese level salary for the true Roppongi experience.

Besides, tomorrow will bring plenty of beer… 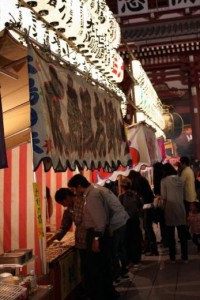