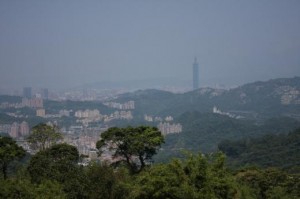 I’m not usually the type to force myself out of bed at 7.30am on a Sunday morning, much less after a night of watching people pummel each other in some basement bar. Time limits, however, call for desperate measures, and 7.30 it was. My dodgy hotel sits right next to the 2-28 peace park, a park built in memory of an important turning point in the overturn of Taiwan’s opinion-dividing former dictator. I made my way past the early morning stinky Tofu stands (how can anyone eat gone off Tofu? Though to be fair I have developed a strange sense of agreement with Korea’s selection of fermented vegetables… ) down to 2-28, trying hard not to pinch my nose and wrinkle my forehead as I went.

2-28 is not exactly a typical city centre park. Full of anti-Communist artwork, ponds full of huge Poi overlooked by palm trees and a selection of Taiwan’s most significant museums, the park forms a kind of monument to the drama of Taiwan’s recent history. On this occasional, though, I wasn’t here for the history: it was far too early. Instead I’d come to soak up the atmosphere so typical of early mornings in Chinese (?) parks.

I started with a foot massage. Well they call it a foot massage – what this actually involves is walking across a pathway filled with oddly angled pebbles – a little like cobbles, but far more spiky – without any shoes. I cringed and yelped embarrassingly as the locals jogged happily along beside me. Painful (but culturally necessary) jaunt over, I turned to Taichi. Well I say ‘I turned’ – I mean that very literally. I turned about 180 degrees: I don’t have the necessary flexibility or Sunday morning energy to even attempt the slow motion martial art, but watching it is a pretty impressive site. Whole crowds of Taiwanese men and women flocked to one point in the middle of the park, where they were lead through an impressive slow motion routine by a man so flexible he had to be double jointed. Just watching made me grimace like I was back on the ‘massage trail’. After about half an hour the swords came out, and a slightly smaller crowd found huge spaces in the middle of the grassy patch, and swung them around slowly but intricately. The pace of the ‘attack’ certainly doesn’t make it seem any less vicious.

Strange Sunday morning experiences over (I love these quirky aspects of foreign cultures, they never cease to be interesting!) I headed for the subway and the green hills of South Taipei. I’d decided late the night before that if I was going to set my alarm early, I was going to reward myself with a much slower paced day. I made my way to Maokong, a hilly district just South of Taipei that specialises in Green Tea and long hikes. The Gondola – which connects directly to the extremely efficient Taipei subway network – rises and falls over a host of jungle covered mountains, past ancient and temples and finally onto a small side peak next to a large host of tea houses.

By now I was out of hiking time, and instead settled for an extremely pricey Green Tea overlooking the immense scene (which somehow still managed to include 101 building, even from a whole host of miles and several large hills away). As I attempted to produce something resembling the genuine version of the herbal beverage (damn self service!) I eyed the views and reflected on one of the most interesting, hyperactive two days of travel I’ve ever experienced.

I slept to the airport, on the plane and all the way back to Seoul before bundling into the pub about 20 seconds after the start of the Manchester United vs. Chelsea game. I’m sure I sat throughout with a look of smug satisfaction on my face, thinking back on a weekend so full of action it barely seems real. Taipei in only two days. And I loved every second of it, definitely somewhere I want to go back to.

So, what did you do with your weekend?!