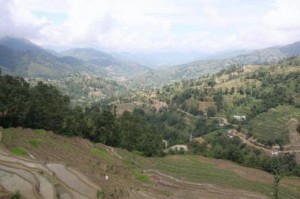 25kms in and I was seriously considering flagging down a truck, grabbing a lift back to the capital and putting my first real experience of mountain biking as something I’ve tried, but not really taken to. 25kms of up hill. Yes, okay, over the whole distance the rise was only 1km, which makes it only a 1:25 hill, but after 25kms I was ready to admit that I’m about as well suited to mountain biking as a geriatric whale and turn round and go home. Preferably on four wheels.

The view was fantastic though, miles of paddy fields and mountains, and a slow paced peddle through some of Nepal’s tiny mountainside villages that gave me a taste of what the Nepalese countryside is all about. In the course of the ride I rook breaks to lift small children onto the saddle, or have a tea or two that old women rushed out of the house to offer.

At 25kms in, I knew that I still had another 45ks to go before I got round the full circuit, but a lunch of instant noodles and a sugary Fanta (why is that Asian soft drinks are so much more sugary?? I mean it’s not like Fanta doesn’t have enough sugar in it anyway, but in India they more than double the dose. Good for energy hits, but otherwise awful!) revived me to the point that I decided to carry on. Into the Shirapuri national park I went. 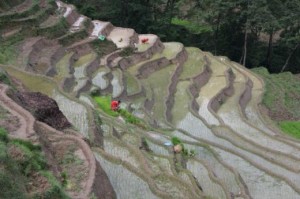 It had been raining a lot overnight, and on arriving in Shirapuri I found narrow cliffside tracks that were often not wide enough to fit both me and the bike down. They went steeply up and down, with the troughs filling with sticky mud and dragging the bike around, all over the place. A truly frightening experience, one that coated me in mud from head to toe, and left me alternating between walking and descending at a snails pace, trying to keep the bike the other side of the path from the cliff edge. Then it started to rain, and waterfalls started to flow down the muddy paths. The clouds cleared just enough to look down into the Himalayan valley the other side from Kathmandu, and – ten miles from anywhere – I started to wonder about my sanity. I mean you’d have to be insane to want to do this, right? Twenty minutes later I was loving it.

For all the danger, it was insanely thrilling, and after a little while sheer exhaustion becomes quite an enjoyable feeling.

I eventually stumbled out of the forest and found a muddy road – evidently the one I should have been following! It was still a muddy mess, but one that was a full cars width wide and didn’t seem to have any obvious death risk to it. I think my route was more fun.

All that was left was to hunt down the final kilometers, and a good route back to Kathmandu. I came across an army checkpoint, and they pointed me down a viciously steep (but thankfully sealed) road. Down I went, back to Kathmandu in just over an hour, without turning the pedals more than half a dozen times the whole way. It was a thrilling, twisting route with u turns everywhere, that coated me in the mud left behind my trucks so I arrived in the city centre coated in the stuff, and as an object of some fascination to the locals as I passed through the diplomatic district with brown splodges flaking from my face.

Tonight I broke my vegetarian regime and replaced some of the lost energy with a huge pepper steak. I ache all over, but I think mountain biking has a new convert. A new convert who needs to be about twice as fit, or cycle about half the distance, but a new convert none the less.