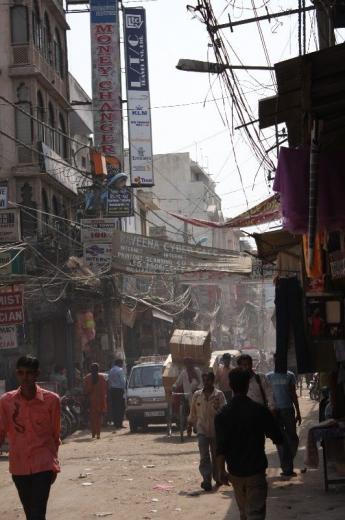 The Indian government should seriously consider moving their main transport hub. Not that Delhi doesn’t do the transport side of things perfectly adequately, it’s just that as an ‘introduction to India’ the place makes you want to turn round and get on the first flight back. I knew what to expect, this is the fourth time I’ve turned up in Delhi on my travels and every one has left a lasting impression. There are some pretty sites, some wonderful little backpacker restaurants and (on some side streets) a great backpacker vibe very much like Bangkok dipped in a volcano on a large dose of sedatives. What overwhelms everything else though is no the infamous ‘Delhi Belly’ (that’s more of an all round feature of India), but the scam artists. Or, as they’re known around here, locals.

There really is no escaping it. Helena and I are pretty well versed in the ways the people of poorer countries attempt to extract money from traveller; between us we’re closing in on 50 different countries. We put up a pretty good front and usually give as good as we get, but Delhi requires a rock solid scam radar. We’ve been here a day, I’ll go from the start:

10.30 am – land.
11.10 am – catch taxi outside the airport. Direct him to ‘Main Bazaar’, Delhi’s backpacker district. Taxi driver starts discussing how ‘overpriced’ Main Bazaar is (laughable, you’ll rarely stay anywhere cheaper). We tell him the high prices are okay. He takes us to Main Bazaar. Except it’s not Main Bazaar (he doesn’t seem to realise I know the street quite well). Neither is Main Bazaar ‘around the corner’. We walk away for long enough to avoid him picking up a commission and take the next decent hotel. Major scam attempt 1 averted, but we’re now in the wrong district completely.
midday – take a rickshaw to Connaught Place. Arrive and it’s not Connaught Place, another area I know fairly well. Driver attempts to shuffle us into the ‘official government tourism office’ (there are a good 50 ‘official government tourism offices’ in the area, all of which serve no purpose but to tell you the entire Indian transport system is temporarily shut down, and then sell you an overpriced tour instead). Ignore tourism office, walk away. Major scam attempt 2 averted.
12.45 pm – find the real Connaught Place (on foot). Note similarities with Helena’s province of birth. Decide to eat, to avoid the scammers for a while. 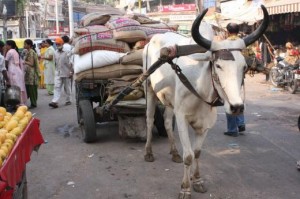 1.15 pm – man starts walking alongside us as we walk towards Main Bazaar, claiming to be from the train authorities and available to ‘help us buy our tickets’. We eventually turn up at the main station, only to find that it’s changed substantially from how I remember it. That’s right, Delhi actually has a FAKE MAIN STATION to try to con travellers out of money. Incredible. It’s pretty convincing too, being right next to the real main station (so near that the road sign actually points nearer to the fake one than the real one) and so having the trains running around behind it. Decided, on balance, to take the bus instead. Good work Helena, I very nearly didn’t catch the scam, and I’ve been to that station before. Unreal! Major scam attempt 3 averted.

I could go on. Delhi really is unreal when it comes to this stuff; so far beyond anywhere else it’s not even comparable. We’re actually pretty proud to have come out the other side with our money in tact, and the only major downside being our hotel being a little away from where we’d like it to be. There were at least 10 other slightly more easily averted attempts to get us into ‘government tourist offices’, but they were laughably poor.

Aside from the scams, it was a surprisingly nice day. We randomly bumped into one of Helena’s good friends in the backstreets of Pahar Ganj (amazing how these things happen, we knew she was in India, but so are more than a billion other people… ), and sat and drank coffee and Banana Lassis in a shady corner. It needed to be shady, as a thermometer in a corner read 53.8 Celsius when we walked past it, and that was half four in the afternoon. I have no idea if that was accurate – I’d imagine not – but it’s certainly the hottest weather I’ve ever experienced anywhere right now.

Other tit bits from our first day included a host of curries, not being sick at all yet (touch wood), checking out the 60ft tall Ganesh Temple (shaped like a huge pink multi-armed monkey) as we drove along a main road and collapsing in our air-con room to get over a serious difficulty sleeping on the (incredibly cold) flight.

Delhi’s tough, and we’ve decided to move on to somewhere calmer tomorrow. We’re taking an overnight sleeper bus to Pushkar, in Rajahstan. It’s been a long day or two (thanks for the great send off at home guys, especially all the cheese! Hehe. I really should blog about that too, but energy and Delhi on the mind prohibits right now). It’s good to be back!

PS – this is my own little revenge on scam-heavy Delhi – blog typed on stolen wireless. Ha!