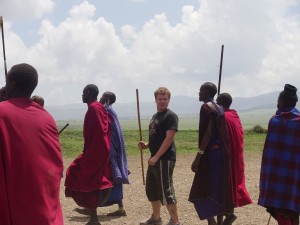 Serengeti National Park is the big one. At least that’s the theory: both physically and reputation wise, this is just about as big as safari destination gets, but we’ve come at completely the wrong time. We were more than aware that it wasn’t ‘Serengeti Season’, and that most of the animals had already migrated onto Ngorongoro, but the park just held such a near-mystical appeal that there was no way we were going to miss it off our agenda.

On the plus side, the migration to Ngorongoro was still taking place. It takes from early December until sometime in February for the animals to walk what’s a four or five hour drive from the heart of the Serengeti to the crater, and for much of the journey, we were surrounded by zebra, wildebeest, buffalo, hyena and even giraffes strolling through the plains and making their way down into the crater. It’s impossible to grasp the sheer scale of the migration, other than to point out that the pains stretched as far as we can see, and there was barely a ten metre square area in view – at least not more than a few metres from the road – that didn’t have at least one animal in it. The total number of wildebeests alone making the journey is said to be in the region of 1.3 million. Sadly, for most of this journey I was trying my best not to give breakfast and encore – damn stomach bug – but it was still unforgettable.

When we actually arrived in the centre of the Serengeti, then, most of the animals had already left, but that actually didn’t prove to be a particularly big negative. The park itself is so massive, with plains that genuinely allowed you to look as far as the horizon, at times without seeing so much as a tree in the way, that just getting sucked in to the scale of the environment was something special. I’m still feeling a little midget like. It also gave a chance to make the most of the lesser animals – to soak up the behaviour of the warthogs, the huge wing-spans of the abundant varieties of vultures and the colourful little songbirds that are left behind to snack on the remaining grass and incredible number of insects. 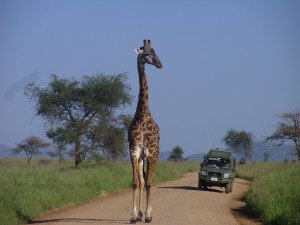 We were also very lucky in that when we did track down larger wildlife it tended to be something a bit special. We found a hippo pool housing perhaps 50 hippos, bustling around making noises like huge pigs in the morning sun. We also found a recently killed buffalo, with a lion sitting happily not far off, and returning the following morning to find that the hyenas, a jackal and an entire patrol of vultures had tracked down the deceased buffalo and were fighting noisily over who got to pick the bones dry. It was smelly, but a fascintating watch, with the vicious pecking order coming out as hyena > jackal (a surprisingly small creature to intimidate the vultures, I thought) > vultures, who fought amongst themselves for prime position when the other two had finished.

We got a real close up experience of a giraffe, perhaps three times the height of our open-top jeep, and simply strolling down one of the park’s main roads, and watched a family of moneys play along the side of the road. A local family in the campsite offered a particularly entertaining moment early on the second morning, wondering around the tents of sleeping guests doing very convincing impersonations of elephants and monkeys right around the area where people’s heads might be found. There were a few very nervous tent exits that morning. 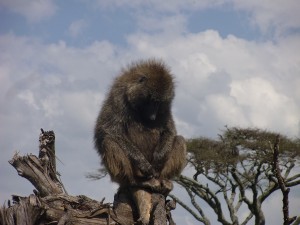 If there was any downside to the safari aspect of the trip, it probably fell with the food (pretty dreadful, though for some of the time we weren’t in a fit state to eat it anyway – I hope it’s helped me lose a little of my belly if nothing else), and in the German couple’s bad planning (well, that and another slight con from the safari company) that meant that they spent a little too much time worrying that they were going to have to pay out for an extra day in the park before they made their bus out of the place, a really quite expensive addition.

On the way back to Arusha (even the name of the place brings back awful memories… gah), we dropped in on a Maasai village. I felt a bit weird about this kind of tourism to begin with (it seems to exploit rather than benefit, but I’m told there’s a clever system set up to limit tourism and maintain traditional cultures. The village was nothing more than perhaps 18 tiny straw and mud huts built up around a tree in the middle of one of those vast plains, with nothing else in sight except the road passing through. We were greeted with a traditional dance, which – after a little pressure – I joined in with, carrying a brutal looking stick and hopping from foot to foot around in a circle with the Maasai warriors, while the tribal women sung a backing anthem.

We were then shown around the village, inside the tiny houses, inside which you can barely stand up, and given a little explanation of the lifestyle. The Maasai move with their animals, relocating every time the land is no longer providing the sustenance their cows (particularly sacred), goats and birds need. They dress in a Maasai rug, a kind of checked wrap that cleverly takes in their entire bodies, and wear shoes constructed from a part of a damage tyre, designed to stop their feet being damaged by spiky foliage (how they did this before car tyres were readily available, I’m not entirely sure). The entire village is surrounded by spiky bushes, with two openings that are closed off at night and allow the Maasai to protect themselves and their animals (also brought inside the ring at night) from the wilds of the plains outside. It seems like scant protection, but apparently it works. 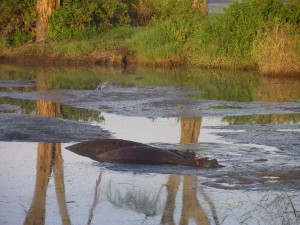 The blood, meat and milk of the cow is a sacred food supply, and the blood and milk in particular are often stored in a hollowed out sausage fruit (these things really do look like bloated sausages hanging from a tree, and apparently are often used by leopards to catch gazelles, who love them. The leopards simply leap from the tree when a gazelle arrives, landing on top of them, and they have their dinner). Another interesting little artefact was the tribal mace-like device used for special occasions, which could double as a pretty nasty hammer, but was stunningly decorated.

Christmas day with the Maasai lasted about an hour, and we managed to forget to bring out the Christmas pudding we’d brought along as a kind of cultural exchange (in fact, it’s still sitting in my day bag now), but it was a real fascinating experience, and a much-needed break on the long drive back to Arusha. Despite spending most of your time sat down, Safari’s exhausting if only because the roads (and in our case illness) really take it out of you, but – as you can probably tell by the amount I’ve managed to write on the subject over the last few entries – it’s utterly inspiring and at times genuinely breath-taking. What an experience!