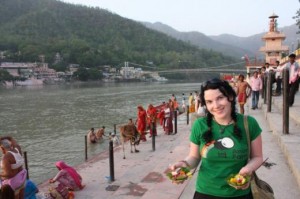 Everything here is about the river. The most holy river in the world, Indians say, and the wash, swim, bath, worship, live and die on its banks. The whole town of Rishikesh is strung out along the Ghats – tall concrete steps that slope down below the Ganges water line – and it’s hard for visitors not to feel like they live to the sloshing sound of the near white water of the upper Ganges too.

We’ve spent our last couple of days making the most of the famous river. We hired a scooter and drove high into the mountains, past tiny roadside shacks where poor farming families supplement their income selling soft drinks at the side of the road. We found hilltop temples, slopes shaped into paddy fields, waiting for the monsoon, and endless dirty, dusty paths into the mountain with sheer drops off down to the Ganges.

Riding just for the sake of it is fantastic here, slowly winding your way up into the mountains. We found a couple of waterfalls to swim in and cool off, and ran out of petrol right in the centre of Rishikesh town (take a look at the bridge picture attached to this entry – you can just about make out our handlebars in it if you have a very large screen – the photo is from the restaurant we had lunch in after abandoning the bike on a petrol trek!). 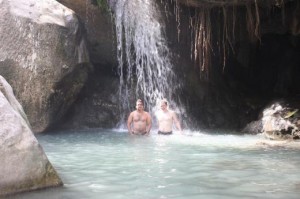 The water here is extremely cold, having come down from thousands of metres up in the Himalayas. The pool at the bottom of our waterfall had been in the sun for long enough to warm to a sensible temperature, but the Ganges itself it fast flowing and wide, and a full 30 degrees colder than air temperature. Rishikesh is the first point that it really slows down at, and so the banks of the river occasionally have little sandy beaches, crumbled stones washed down from miles above that are great for sunbathing and an extremely cold dip out of the 35-degree (mild to us now!) heat.

One evening we headed to the central Ghats (riverside steps for washing, worship and pretty much everything else) in the town centre and watched the sunset ceremonies. Thousands of locals appear with little boats made from leaves. They fill them with flowers, incense and then a small cotton flame with tiny firelighters in the middle, and float them down the river as a devotional offering. Sitting on the Ghats and watching the ‘Puja’s’ float by while the pilgrims sing gently is a really atmospheric experience. We made our own offering before heading home.

I can’t write another entry about Rishikesh without mentioning the food, which is largely fantastic but occasionally extremely odd. They have a dish they call ‘sizzler’, vegetables served on a red hot plate with mild sauces, often in the largest leaves of a cabbage, which the sauces slowly drip through and boil on the plate. The lassis are also fantastic, loads of the restaurant serve them with milkshake. We have had some realy strange meals too though, for example my ‘Spanish Omelette’, which looked a bloated cake made only from egg white and topped with tiny pieces of tomato and onion that looked like they were there for decoration. 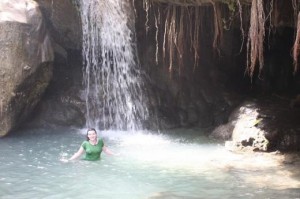 There are some odd foreigner here too, some of them look like they’ve been here a little too long and lost their mind amongst all the spirituality. There’s one woman in particular who walks through the market at a snails pace, head held high with an inane smile on her face. We’ve (perhaps cruelly) nicknamed her ‘enlightened girl’. Another similar lady walks around in full blown ‘native’ Indian clothing, but with bright pink lipstick and heavy eye shadow. She’s become India Barbie.

It’s all great, but it also feels like there’s an uncertain shadow hanging over me. We had planned to stay in India for a long time, perhaps heading North to Nepal when our visas expired, me writing some articles and Helena applying for jobs, and hanging around until something came in. Now our trip might be over in a week.

I’m in the process of applying for a staff position at the Korea Herald, which would require me to be back in Seoul in just two weeks. In a way it would be a dream come true, a chance to work full time at a newspaper that’s extremely significant in its country, but it would come with a tinge of regret too. An opportunity I can’t – and certainly won’t – turn down if it comes my way, but also a lost chance to trek the Himalayas, relax in the Tibetan communities and explore some trails in Nepal. Okay, maybe I want to have my cake and eat it, I’m hoping I get the job, but it won’t be the end of the world if I don’t. We’ll leave it to fate. Arriving in Seoul in a week’s time, for all the time I’ve spent (and loved) there would be so unexpected it’d be a real shock to the system.

A nervous few days finding out what life has in store for me! 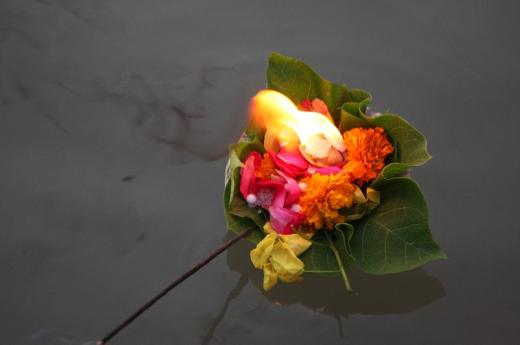 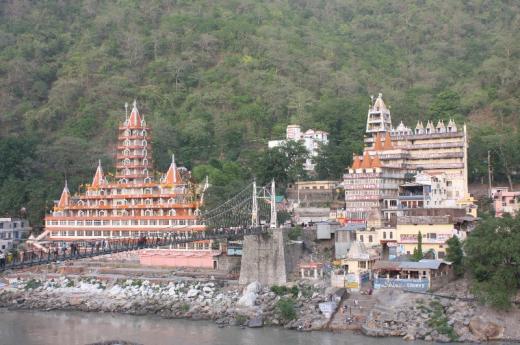