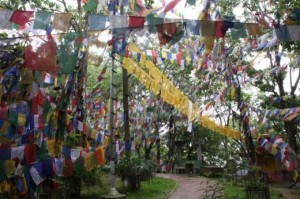 When travelling, I have an almost compulsive need to climb to the heights of whatever city I’m in and stare down at it all. Usually, the reward is in the exercise and in the view. In Darjeeling, the cloud came in and I couldn’t see more than twenty metres in front of me, but the top of ‘Observatory Hill’ had a far more impressive reward.

The central Darjeeling temple is sacred to both Buddhists and Hindus, and is one of the most peaceful places I’ve ever been. Tens of thousands of prayer flags were draped from every tree, some making up complete walls around the pathways and others hanging in stunning chain patterns, creating a kind of roof over it all. The temple itself was unspectacular, but the prayer flags made such a memorable image that I sat for a couple of hours just soaking up the atmosphere and snapping photographs of monkeys swinging around them. Definitely one of the most beautiful temples I’ve ever visited (see pictures).

Darjeeling at this time of year seems to be invariably draped in a coating of mist. The clouds only occasionally break for long enough to look down into the valleys, which are a beautiful shade of damp green tea plantations, and seem to roll around at unfeasibly odd angles. It’s a shame, as so far I haven’t got a proper look at the mountain ranges its famous for, but the other attractions are more than making up for it. 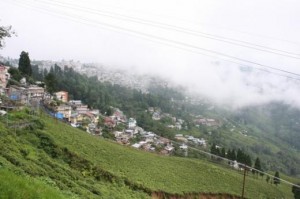 After the temple I headed to Darjeeling zoo. The zoo itself is fairly run off the mill (though there is an extremely impressive huge hairy black yak), but the Himalayan Mountain Institute and Tenzing Norgay’s grave are also on the site, and they were well worth a look. They have things like original copies of the newspapers from when Everest was climbed, original equipment, and stories about Everest attempts, different routes and that ‘did they didn’t they attempt’ years before Hilary and Norgay’s. There’s also a to scale horizontal and vertical map of the Himalayas that gives and idea of just how severe the mountains are.

Of course, I couldn’t come to Darjeeling and not check out the tea plantation, so I headed down to them next. The ‘Happy Valley’ tea plantation makes the most expensive Darjeeling tea, as it is the highest tea plantation in Darjeeling. It covered the hillsides for miles down Darjeeling’s Western slopes, and the highest quality tea is reserved exclusively for Harrods. Unless you meet the five second tea lady, that is. 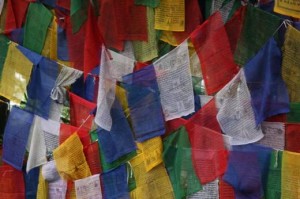 There’s a tiny hut in the middle of the plantation, where an elderly woman offers to explain the tea trade to the occasional passing tourist. She calls herself the ‘five second tea lady’. She held up a tealeaf, pointing to each of the leaves and explaining their relative value. The brightest green at the head of the stalk is the most valuable, with the second and third leaves also used for less expensive or blended teas. To demonstrate the quality of the upper most leaves, the lady throws a small dried selection of leaves into some boiling water, swills it around for five seconds, and then pours it through a sieve to serve up. It was probably the best tea I’ve ever tasted. The Happy Valley’s best tea is named after all its properties: ‘Super Fine Tippy Golden Flowery Orange Piko 1’ (one as it’s the first lead, piko means pick). You can even make decaffeinated tea with the leaves; as long as they’re not in the water for more than seven seconds, the caffeine doesn’t get the chance to escape the leaf. The five-second tea lady has lived in the Happy Valley tea plantation for all her life, and no doubt enjoys her sneaky business running on Harrod’s finest crop! I bought a small bag to bring home; Mr Al Fayed’s more than rich enough already.

I’m really impressed by Darjeeling, it’s atmospheric and full of things to do. Tomorrow I’ll be heading up a nearby hill early in the morning to try and get a better view at the Himalayas, before heading on to Nepal via a ride on the ‘toy train’ along some dramatic peaks the day after.

Heading towards home for the first time since Ahmedabad! 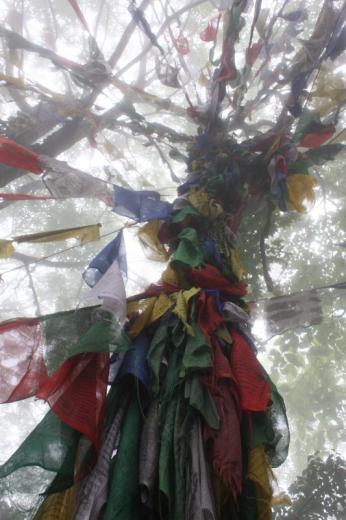