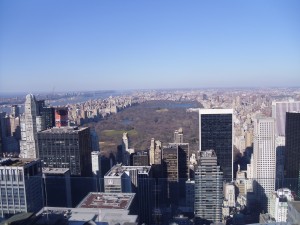 Hangover = cooked breakfast, especially on Helena’s actual birthday. For some reason we decided to have ours in Chelsea, a quiet region of south west Manhattan that we found less than inspiring on a Sunday morning. So much so that we couldn’t find the energy to trek over to the Highline Park (built on a disused railway ten metres above the district, and running for perhaps a kilometre over the city) and opted for the higher views from The Rockefeller Centre instead.

The Rockefeller turned out to be better than The Empire State, in terms of views, and had an equally impressive story. The huge array of national flags in the plaza surrounding one of those tiny inner-city skating rinks (the ones that require turning constantly) made the prefect spot to just stare up, entirely surrounded by the brainchild of one very ambitious man. The Rockefeller Centre takes up nine entire blocks, and its highest point – ‘The Top Of The Rock’ – is the main attraction. From it, you can see four different states, as well as incredible views of Manhattan and the rest of New York, and the Empire State Building itself.

Things were far less windy (just a good choice of day, perhaps), and far less packed than the Empire State, and with three different levels to glance from (and a top level that has views in every direction at the same time, alongside the New York weather measurement station), it was lucky we did this second, as The Empire State might have seemed far less impressive the other way around.

The main things Helena wanted to do for her birthday was see a Broadway musical. As buying online is extremely expensive (around $150 per ticket for decent seats, as well as an outrageous $60 per person booking fee), we decided to gamble on going to the TKTS booth in Time Square and getting discount tickets on the day. That meant queuing for an hour from about 2, to be near the front, and also having little idea of what we’d actually get to see until the tickets flashed up at the same time as they went on sale, bang on 3pm. The queuing certainly wasn’t dull, though, with performances from some of the cast of Chicago as a selling point, and loads of local touts selling their own plays. Helena went off shopping (it was her birthday, to be fair), and came back five minutes before the booths opened, choosing Godspell over Chicago, Priscilla Queen Of The Desert, Rock Of Ages and Mamma Mia. 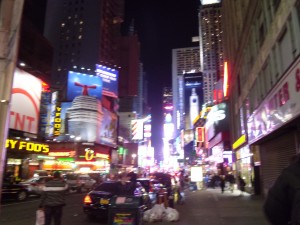 As you might have gathered from the title, Godspell is a little on the religious side (being what rural Ireland might describe as a heathen, that didn’t particular appeal), but the acting more than made up for it. The star (Jesus) was played by a lead character in the very impressive American drug drama Weeds (quite a change, from child cannabis dealer to the messiah – cue that Monty Python quote), but the whole cast was impressive, and the message delivered with a whole lot of wit. I found the first half more impressive than the second, in part because of the slightly throwaway humour (the walking on water was particularly impressive, as was the water to wine moment), but it was a great night all in, even when they did wrap things up with an at least semi-serious last supper and crucifixion.

There were some lovely extra touches, too. We were sat in the front row, so had an incredible view of the circular stage in the centre of the room (the theatre’s named The Circle In The Square after the set up), but come the interval, the entire audience could come up on stage and drink ‘wine’ (blackcurrant) with the cast, who continued singing away from the corners and joking around. The way the pianist was mixed in with the acting set up was great, as well.

Having had a huge Mexican meal right before (people weren’t lying in telling me Mexican food is better in the States), we weren’t quite ready to call it a night, especially once we’d topped up with coffee and birthday cake, so we headed for a bit of live comedy to top things off.

Being slightly lazy, we opted for the Time Square tout option and the Ha Club. It is, quite blatantly, a bit of a con (anything that you’re hassled for in the street in major tourist spots tends to me), and certainly didn’t feature the big name comedians that the touts like to suggest are around, but given that it was reasonably cheap, and came only with the requirement that we bought drinks that we were going to buy anyway, we weren’t all that bothered.

I couldn’t help notice that a whole lot of the local comedy was incredibly race based (as in entire sets of joking comparisons between people of different backgrounds and skin colours), and an elderly woman who made up one of the four acts would have been funnier being filmed for a televised show in audience reaction (she was dreadfully, painfully unfunny), but it still made for a great night closer, especially as Time Square was nearly empty when we walked out of the place, somehow making it all the more overwhelming. Those colours really are ridiculous; there was a police car in the middle of it, and the flashing lights really, really didn’t stand out.

I’ve only seen overload quite like New York once, in Tokyo. Both feel like they’d take years of digging to come close to truly understanding.