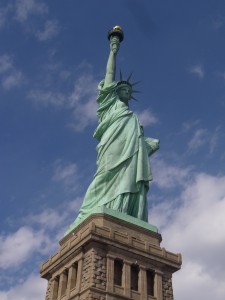 So we’re still adjusting a little to New York time, and it’s having weird effects. I think our body clocks are twisted around enough not to really understand what’s going on, and waking up in the middle of the night and then sleeping in until times that are into the early afternoon back home (but still only 9 or 10 here, admittedly) has become a little difficult to avoid. With so much to see its a little frustrating, but entirely escaped jetlag was always going to be a problem with a short trip. Still, we’re working our way through the to do list.

The Statue Of Liberty is a real American cliché, of course, but it’s also a must see. When you reach the far end of Manhattan and stare at the less built up islands over in New Jersey, a little bit of the Manhattan mentality – that it might not even be worth leaving the island pretty much ever – starts to make sense. The streets are rammed with personality and just seemed to stretch forever, so much so that it’s difficult to picture what could possibly be over the river that would actually surpass it. You can probably gather by that sentence that I’m really quite taken with New York.

The Statue of Liberty cruise leaves pretty much constantly through the day, and is actually more impressive for its views of the Manhattan Skyline than the approach to the Statue itself. Perhaps it’s the way the financial district completely dwarfs the landmark, but having chosen to sit at the front of the boat and watch the statue grow over the front bow, we spent a lot of our time wondering if we would be better off at the back. When we reached the actual island, we took cheesy pictures holding a coffee cup aloft and spent a whole lot more time just staring back at Manhattan and taking in the skyline.

Staring at Manhattan was a theme for today, in fact, broken only by wondering its streets and the other cruise trip, to Ellis Island. Ellis Island was once a landing points for immigrants arriving in America, who were processed, kept in the hospitals for disease control and check-up, and eventually given the go ahead to enter the country. Later it became a hospital for victims of the Second World War (which seems a little harsh – sent home, but still kept offshore). With the obvious Irish connection, we tried to track down the history of a couple of Helena’s relatives, but with no luck. 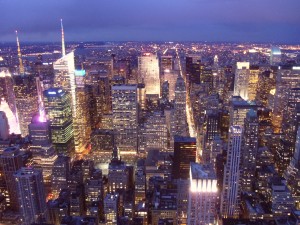 The island itself was an impressive feat, though, having been built from the depths using landfill. At one point there was an entire isolated hospital island for treatment of those with measles, but the most impressive remnants are in the photos of the old arrivals hall style area as it once was, the arrival queues and the belongings of Irish, Italian, Lebanese and Turkish immigrants.

The sights have tended to make us laugh as well as impress us, and Ellis Island was a great example of that: whoever puts these things together seems to be both incredibly nationalist and lean towards hyperbole. Perhaps it’s just the American way, but the monument to the people of the Titanic, which red distinctly like the worst fate that befell those that drowned in icy water was the fact that they never made it to America (rather than, you know, death), didn’t seem like quite the right tone. The endless praise of a Manhattan skyline that was distinctly underdeveloped at the time as being ‘unlike anything any of the visitors had ever seen before’ would probably have been fine once, but it was hammed up to an incredible degree. Funny from the outside, but I do wonder how many take these things at face value.

After the two main sights, we headed for 34th Street. In 28 years, I’d yet to be in an American diner (or even a decent approximation of one), so drinking Egg Cream (which tasted like a liquid form of the Cream Egg – coincidence? Possibly not) and chowing down a quite ludicrously huge burger with bacon and blue cheese was a nice aside. 34th Street was a good deal cheaper than Soho yesterday, so I’ve been stocking up on bargain t-shirts, jeans and other assorted stuff. The route took us past Madison Square Garden, a concert venue I’d love to experience, but not this week, as it’s also a basketball venue, and the east coast college basketball championships are on this week (it’s called ‘March Madness’, but don’t ask me any more than that; I’m a basketball dunce). I’ve managed to persuade Helena to head out to New Jersey (yes, we’ll be leaving Manhattan despite only being here for less than a week, and not even for Brooklyn, Queens or The Bronx) to see the New Jersey Nets in the NBA on Monday night, which should be quite an experience.

So we finished the day off (early – that jet lag again) at the top of The Empire State Building, failing to re-enact anything remotely romantic amid the big crowds, but impressed nonetheless. We caught the sun down shift, and the photos even from a point and shoot digital are something just a little bit special. The viewing platform on the 86th floor is quite incredibly windy and really quite bitingly cold, but you can see four different US states as the sun goes down, and when it has set, the lines that seem to be painted across the streets by the moving cars are just wonderful. Central Park, a huge black hole in the heart of Manhattan, really stands out from up there. Even after spending half the day eyeing Manhattan, it’s tempting to head to ‘The Top Of The Rock’, another observatory platform we have included in our City Pass, before the end of the trip, too.

I realized about half way through this day of pure Americana that I did the entire thing wearing a t-shirt of a punk band called NOFX, specifically a t-shirt from their album ‘The Decline’. It’s a 20-odd minute single track epic that rips the US constitution to pieces, and finishes with the immortal line ‘Liberty for just us, and not all’. I’m more than a little thankful that I had spent almost the entire day up to that point with it covered by a hoodie!

Sightseeing central, then. People always did say that New York is a million miles from America. I can’t deny being a sceptic when it comes to the much touted American cultural outlook, but New York… even this early on, I’d be hard pressed to name a city I prefer.