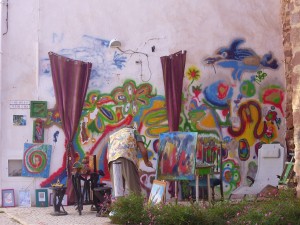 I booked our trip to Portugal months ago on something of a whim. I was looking for something nice to give to Helena on our wedding day, and seeing as we’re both obsessed with travel, a holiday for a short way into our marriage seemed like a good choice. As it turned out, this came at a time when I could barely have needed it more. The last few months have been painfully hectic, as you may have gathered from the work/ music (also a form of work, believe it or not) nature of this blog. The Algarve was kind to us, being about as relaxed as I could possibly have hoped for.

We decided to go luxury. In the off season the Algarve has some really silly prices for insanely luxurious accommodation, and we managed to track down two hotels – one by the coast and one in the mountains – that had five star ratings yet came in at around 100 Euro for the night for both of us. The first of those was outside a tiny town called Monchique, a place that clings to the side of a forested hill towards the west of The Algarve. As we were landing early, we decided to take a cruise around the area a little first. We dropped in on the town the airport’s named after, Faro, which turned out to be an impressively un-touristy little corner.

I instantly fell in love with Portuguese paving. That might sound like the oddest thing in the world, but having last set-foot in Portugal at the age of one (I don’t remember being one, and I must admit I look a little disbelievingly on those who claim they do, but maybe I’m just a bit brain dead in the memory department), I didn’t remember the pedestrianized areas made from tiny squares of pale sand. They make for one huge improvement on grey sidewalks, and the town itself was full of gorgeous winding streets with whitewashed and ornately decorated buildings that immediately put the mind at rest. Of all the places we visited, Faro might also have had the slowest pace of life, the kind of place that’s just perfect for a bacon croissant and half an hour sat around soaking up the sun and doing absolutely nothing. Dublin’s not exactly manic, but life here can be, and compared to Ireland, The Algarve is like slowing down to a dreamy, comatose state. 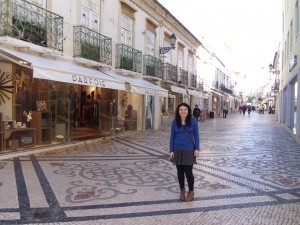 Next up was the drive to Mochinique, through the mountains to what turned out to be an absolutely insane level of luxury hotel. We thought we’d booked a room, but it turns out that for one hundred Euro a night in late October, you get a full apartment. I made a little video to show just how ludicrously luxurious this place was, but it turns out the file size was far too big to put up here, so you’ll have to make do with the pictures below.

The Wellness Centre also had a fantastic spa, so we made the most of an afternoon swimming in the salt water pool, dipping in and out of the sauna and steam room and generally pampering ourselves in a way that dissolved tiredness rapidly enough for it not to have taken over again just yet. I really need to try and find an affordable place like this in Dublin for the occasionally Sunday winding down. Helena had a full on treatment that even managed to send her to sleep, which was more than a little impressive, though not as impressive as the room itself!

We went up near the peaks of the hills to take a few snaps of the hotel and found a whole host of incredible houses that must be worth millions even in Portugal, and then headed down to Portimao for dinner. I’m sure Portimao is great if you know where you’re going, but as a driver it’s a nightmare. Still, we found plenty more of those quaint streets and a nice Brazilian restaurant where I was roundly mocked for drinking coffee with my steak (don’t drink and drive kids!). Meals in the Algarve come with a whole host of extras, like big lumps of goat’s cheese, olives, pate and bread that’s almost enough to make the main course superfluous. I could get used to that, though I’m pretty sure my waistline couldn’t (on returning home I went for a particularly hard session in the gym, and I still owe myself a few more I’d guess, but more than worth it).

Early the next day we headed for Silves, a tiny little town at the bottom of the Monchique hills, which turned out to be incredibly charming. Just walking the streets on a quiet Saturday morning (Portugal seems to go from snail’s pace to entirely asleep come the weekend), we found a German artist who’d built a studio on the corner of the castle, selling dreadful art. The guy couldn’t paint, but the hippie existence he’d created for himself and his low prices sucked us in anyway, so we now have an awful picture of the surrounding village on our fireplace. Still, it’s a nice reminder of the town, which also had protected chimneys with nesting stalks throughout the town, and a whole load of tiny little patisseries and ice cream shops in amongst the run-down houses. Portugal doesn’t seem to have heard of the supermarket to any great level yet – at least not in the smaller towns – and I love that about it.

I’m going to divide blogs on our stay neatly into ‘Monchique’ and ‘Albafeira’, so I’ll leave this here, and catch up with the second half of our great mini-break in the next entry, along with some even better pictures…