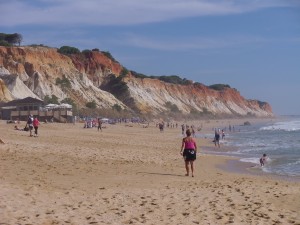 So when you think of the Algarve, for me at least, there are two things that come to mind. One of the haven for retired gangsters reputation, which seems to grow by the day. The other is the sunny beaches, which frankly sound a whole lot more fun. Still, it took us until the afternoon of our second day to make it to our first beach, the seemingly endless stretch outside Lagos (not the capital of Nigeria, sadly), for some time collapsed on white sand.

On the way over, we dropped in on Lagos itself, another one of those incredibly chilled out places where there’s the temptation just to sit yourself in the corner of  a town square, chomp down on some ice cream and soak up rays for entire days. Still, we tried to be at least a little bit cultural, and headed for a museum that showcased the town’s really beautiful golden church. The culture was never going to last long, though.

Lagos’ beach is not a particularly dramatic one – we got to that the following day – but it does have a little ramshackle selection of seaview restaurants built inside garden shed like structures along it’s back. One of the main downsides to the Algarve’s beaches is that no matter how you measure it up, there’s no denying that the Atlantic is seriously cold compared to the Med, but as far as sun (25 degrees in October and enough to cause serious sunburn) and relaxation (fairly empty due to sheer size) go, it’s top class. 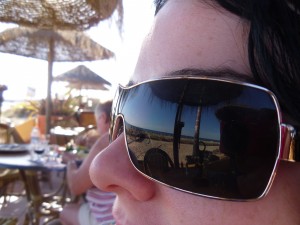 Our second five star hotel of the weekend (check the off peak prices and tell me you wouldn’t) was the Sheraton Algarve in Albafeira. Albafeira itself was pretty nasty. When we got into the city and explored the streets, we found it was pretty much the only corner of the Algarve we explored that seemed based around that typical tourist hassle, and that it was difficult to just stroll around and take it in. The hotel itself, though, which was quite a way out of town, was absolute bliss.

The beach outside Albafaira is the longest in Portugal, and backed by really dramatic cliffs that the Sheraton even has a lift inside of. The rest of the grounds are absolutely huge, with anything you could possibly want to do available somewhere. We spend an hour or so in the Jacuzzi, explored the games room, walked around the half a dozen or so outdoor swimming pools and spent some time in the much warmer indoor one and even walked to their (hugely overpriced) supermarket. It ended up being the laziest final day ever, pretty much confined to the beach with books. The only downside is that a meal costs nearly as much as a room this time of year, but at least you can walk out of the hotel grounds – only about five minutes – and get a relatively normal Portuguese rate.

I’ve been dying for a holiday pretty much since a few weeks after coming back from honeymoon. I have two busy full time jobs on the go at the moment (you’ve probably noticed how music-focused this blog has become), and a major project on the way that I’m not going to say too much about now, but it’s certainly taking up a whole lot of time. A week after getting back from Portugal, I’ve been in the office 42 hours in a four day week and gone up to Belfast to cover an awards show, and I wouldn’t mind doing this all over again… bring on Africa in December!