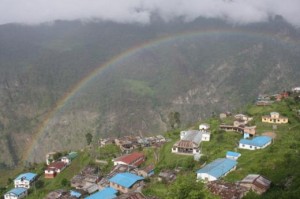 Himalayan roads are something else. Views over dozens of mountains, but invariably perched on the side of a huge drop, and made of mud of the kind of consistency that a bus could easily lose its grip on. A nerve wracking combination, especially when it starts to spit with rain and the driver is more interested in getting to the other end quickly than surviving the journey. It took nine stressful hours to arrive at the trek starting point, at which point even San Ram, my guide looked pretty relieved to be away from the muddy paths.

Dhunche is a one road town, a few kms short of the Tibetan border. The old part of town is a crumbling row of stone houses clinging to a gentle hill, giving way to a massive river valley that was filled with a rainbow when we arrived. Next to the road there’s a scattering of slightly more modern houses and the odd guesthouse, but it still feels like it hasn’t changed in years. An ancient monastery, which seemed to have most of the town sat around on the floor, filled the air with monks singing until the sun went down. Lines of gompas that have deteriorated to little more than piles of stones are spread among the rice fields.

A few hours after we arrived a parade marched through town, marking the 45-day anniversary of someone’s death. Several hundred people walked in a steep circuit, carrying huge plates of Buddhist offerings on their heads or holding onto a prayer book that they touched to each person’s forehead as they passed. It seemed to be a happy occasion; though everyone was dressed up, flour fights started at the back of the parade. 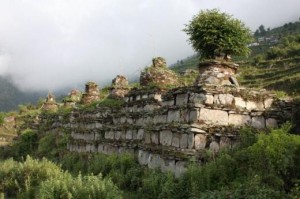 In the hotel I checked on my mountain biking injuries – far more than I thought. I managed to pick up 15 separate leach marks and a chunk out of my right index finger. I’m too clumsy for my own good right now! The hotel seemed to have picked up a tiny bit of Scottish ‘culture’, serving mars bar spring rolls. Though that sounds even more disgusting than battered mars bar, it tasted pretty good, though serving them with chips seemed a little misguided! I ate mine with ‘Rudkhi’, a mountain wine that’s as strong as a mild spirit but served by the coffee sized mug, and went to bed early.

Id decided late on the first night that I was going to push myself as far as I could and see as much as I could, so I set off on the first day at a good pace, and completed the planned route in a little over three hours. As it wasn’t even lunchtime, we sat down in the mist for a Dal Bhat (Nepali Thali – endlessly refillable curry!) and extended the entire trek by a few kilometres each day. We were still on the last parts of the road at this point, so it was easy to walk excessively fast and convince the guide I could handle distances that were really right on the limit of my endurance, but I knew I’d rather come back exhausted, and having seen a lot, than wander slowly along for days. 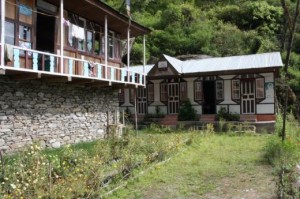 Straight after lunch we left the road, crossing two fast white water rivers and heading down a tiny path through the jungle. The overall height gain wasn’t too big, but huge boulders meant hiking involved going up and down steep paths that vaguely followed the river for the next three hours. The Langtang River is viciously fast, and cooled the bottom of the valley as it passed through. On the (worryingly rusty looking) metal footbridges the spray of the endless waterfalls smashed you in the face; in other places the river cut through dozens of metres of rock and sat at the bottom of cliff faces coated in vines and bees nests.

Every so often we took water from the mountain streams, or stopped to watch big troops of monkeys swinging from the leaves far above us.

It took 7 hours to cover the 25kms to Bamboo, a riverside hamlet with about three buildings, where we stayed in a wooden Tibetan lodge, alone except for the owners. A tiny garden was cut into the hillside, with pathways marked by upturned Everest Beer bottles, a restaurant that surrounded a rusty boiler and Tibetan music featuring various animals playing all day long.

I sat for hours at the waters edge, letting the cold spray wash away the jungle heat, before drying off around the clay stove in the kitchen. The river rushing past the front door was the only noise – Bamboo’s lodge must be one of the most peaceful, secluded hotels in the world off-season. The weather cleared just enough to glimpse our first snow-capped peak, Himal Ganesh, back down the valley as the sun went down, leaving on one of the darkest nights I’ve ever experienced.

In all my travels, I don’t think anywhere’s ever made me feel so far from home; so far from communication as Bamboo.