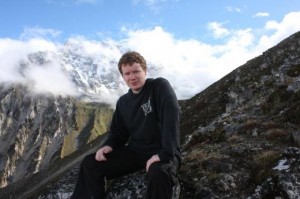 ‘If weather clear, we go top’ was Sang Ram’s verdict on the final summit attempt. I was prepared to concede that the trip to one of Langtang’s smaller peaks would have been fairly pointless in the thick clouds that seemed to enclose the valley regularly, but I wanted to go anyway: even reaching the top meant looking at a few prayer flags and then stumbling back down along the same path, my sense of adventure is just too great to go all that way and not do it.

When we did wake up at 5am to check the forecast, I looked out my window and saw nothing but cloud. I was preparing myself for a debate, but to my surprised, Sang Ram’s verdict was ‘maybe view is okay, you choose which mountain’, whilst pointing to a couple of imposing looking peaks. It took about half a second for me to dismiss my aching legs and point at the bigger one, CherKo Ri. 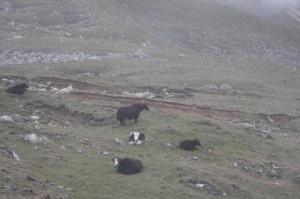 We set off though the mist, and I immediately found the walking harder going than before. My relatively fluent strides of the first three days were replaced by bursts of lactic acid building energy followed by regular breaks, especially near the top. We walked through bushes strewn with hardy looking flowers, past an odd-looking mountain cacti and then into a scramble over hundreds of metres of huge boulders laid out across the hillside.

Half way up we came across the CherKo bird, a species that only exists in Langtang and is named after this particular peak. Along a ledge the weather cleared briefly, revealing some huge mountains, glaciers and rocky scars on a nearby hillside that were so big they could have been carved by the peak of a nearby mountain.

As we reached the top my breathing started to quicken, and for the last 100 vertical metres before the peak my fingers began to swell and pressure the inside of my engagement ring. Each steep upwards step took a little more out of me, and I could barely manage 50 metres of scrambling before needing to pause and get my breath back. When my fingers took a while to go down back in the hotel later, I had to argue the importance of the ring to me and refuse to let anyone try to cut it off. 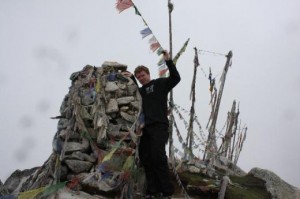 The view faded, until at the very peak, in amongst he Buddhist prayer flags, the only view was of a tiny segment of mountain through a gap in the clouds. A heard of fully grown yak grazed just under the peak, looking totally natural at a height that I wouldn’t feel too comfortable exceeding. I wanted to make the peak pictures more interesting than just me, a few prayer flags and some cloud, so I stripped to my underwear in the cloud and persuaded a bemused guide to snap photos of me. As much as they’re funnier than the more normal pictures, the half naked ones won’t be making it on here!

We ate yaks cheese, stuffed some Sherpa bread with Nepali sweets and sat under he shadow of the tiny gompa at the peak for an hour, waiting for the clouds to clear, but they never got any better than the ridge line view on the way up.

If anything, the way down was worse. The steepness of the slope hammered the knees, and while Sang Ram hopped comfortably down the hillside collecting flowers to take back as Buddhist offerings back in Kathmandu, I stumbled along behind, maneuvering myself with a bamboo stick and tripping over the boulders and bushes. ‘I like yak, run downhill no problem’ Sang Ram enthused; ‘You, slowly slowly no break neck little brother’.

When we finally reached the bottom, there was a whole new problem: the tiny stream at the base of the mountain had doubled in size, becoming a torrent of several metres of gushing white water. A quick exploration revealed there was only one way over: a dodgy piece of bamboo stick pole vaulting across the heart of the stream, and a very wet pair of trainers for the cold two mile walk back to the village.

All of the six people in the village guesthouse attempted CherKo Ri that day, everyone but my guide and I turned back. 5,125 metres is hardly Everest, but standing on the top felt sensational, as did showering and collapsing at the end of it all.