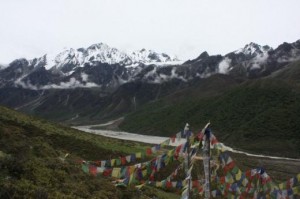 Speed walking on the first two days meant the third day of trekking was just a two hour stroll up the path to Kyan Jin Gompa, which is a little like a Langtang valley base camp. We went early, as the mountain views are better early in the morning, and caught a glimpse of the Langtang range on three sides of the town at the head of the valley.

Kyan Jin Gompa is away from the riverside and incredibly quiet; the mountain air made me feel sleepy and wondering the tiny village amongst the baby yaks (or, often, yak/ cow cross breeds) and breathing in the high altitude gusts was enough to cause a very deep sleep. 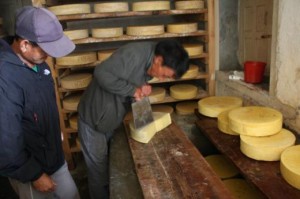 We walked half way to Langtang mountain base camp to look at a massive glacier hanging just below the cloud line, and we came across a couple of yak farmers in a tiny hut on a field an hours walk from anywhere, processing yak milk into butter and cheese with an ancient metal contraption. The yaks walk up to over 5,000 metres during the day, and the farmers milk them overnight then process the milk during the day. In Kyan Jin Gompa it’s almost impossible to order a meal that doesn’t contain some kind of yak product: cheese, milk, butter, yak butter tea or even yak steak. Yak butter tea is so greasy and fattening that I found it almost impossible to drink, though local people need it to put on weight for the winters.

On the way to the glacier we had to pass a landslide zone, which Sang Ram told met to sprint across, before stopping just past the danger zone and praying, throwing flowers or stones into the rubble. It’s very difficult to run through an avalanche zone without looking up, but it would be impossible to look away from the path without falling flat on your face. Scary. 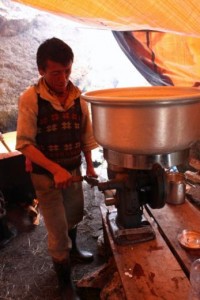 Kyan Jin Gompa’s big tourist attraction is the yak cheese factory, which produces huge disks of cheese to be taken down the valley and on to Kathmandu’s supermarkets. It opened up for the milk producers from the mountains side in the early afternoon, and I went down to watch the big yellow disks being washed and stamped ‘Langtang’. I bought myself half a kilo for about a pound, and used it as an instant energy for trekking away from the village for the rest of the walk. It’s quite a mellow taste, like a mild cheddar with the texture of parmesan.

The lack of visitors at this time of year meant chilling in the kitchen an leaving the dining room closed, Kyan Jin Gompa also had only one hotel open, and about half a dozen guests spending early evenings around the fire and standing in the garden watching the sun go down over the mountains through the cloud.