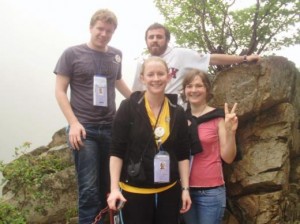 After an uncomfortable night in a coach from Seoul, we arrived at the North Korean border about 7am on Saturday. A shambolic collection of tents manned by stern guards sporting Kim Il Sung pins; how they managed to get several dozen coach loads of South Korean tourists and a handful of Westerners through at all is frankly beyond me, but they did. Eventually. Having survived a brief passport scare (the guards decided to call me back for a second look), I was into the hermit Kingdom for the second time.

After going through the border the initial sensation of big brother style communism quickly subsided. Kumgangsan bares little resemblance to the third world experience I had at Gaesong a couple of months back. The main hotel complex was full of numerous starred hotels, South Korean brands and even international satellite television wired directly into the rooms. Other than the sparsely spread guards there was barely a North Korean in site. The local shops  staffed almost entirely by Chinese citizens or employees of site owners Hyundai Asan  bore no resemblance whatsoever to the brand-free, oddity-sporting variety further West.

All was not lost, however. Kumgangan may be little more than a glorified hiking destination that happens to be the more interesting side of the 38th parallel, but its a seriously beautiful one. The rugged landscape looks so good it could almost be described as unrealistic. The tourism complex was surrounded by the kind of rugged spiky beasts that mountaineers drool over, rising up to over 1600 metres from the nearby sea, and imposing in a way that far more reflected the location than the complex ever could.

Our first day hike, however, was almost a total wash out. The four hour round trip to the top of one of the more significant diamond mountain peaks involved sheer drops, climbs of hundreds of metres that were undertaken entirely on thin metal ladders and numerous older South Korean ajosshis shaking and gasping for breath as they dragged themselves up to the knife-edge peaks. Having used the older travellers as an excuse for a leisurely walk, we took a picture of the four of us at the peak in total white out and descended thinking of the spectacular views we had been promised, but had yet to see on anywhere but the postcard stands. Sunday was to more than make up for it. A swift bottle of two of local rice wine and back to our complex we headed. 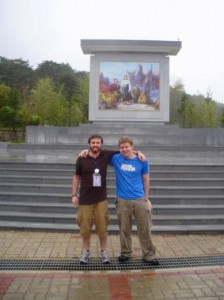 The second activity of the day was a North Korean aerobics display. Wed been told in advance that this was a highlight (difficult to comprehend when in conflict with the idea that youre heading into one of the worlds most inaccessible countries), and it certainly was. We couldnt help wondering what our host athletes thought of their unusually prosperous looking audience; they were clearly unfazed and proceeded to throw themselves around stage in a way that had to be seen to be believed. I dont think Ive ever remained captivated by a circus style acrobatic performance for more than about five minutes before, but this was truly stunning for the full hour and a half. Some highlights included a series of somersaults completed entirely whilst standing on the seat of a moving bicycle; people throwing and catching each other in flying leaps of at least ten metres across the stage and some particularly dangerous looking stunts in which the gymnasts swung around over the head of the audience in a way that would make for an extremely convincing flight scene if used unedited in a Hollywood movie. Very impressive, it was all starting to look worthwhile after all. At one point a particularly spectacular move ended with the unveiling of a flag printed with the word Hana (one) and a picture of the entire Korean peninsula: few failed to notice the background was a stark communist red.

Next up  after completing a walk that Matt and I were totally convinced had taken us out into the North Korean wilds, despite the guards waving us on  we ate and drank at a $10 buffet in North Koreas only five-star hotel, perching uncomfortably next to a chandelier in our rain soaked t-shirts whilst being served by traditionally dressed North Korean waitresses, who looked like they themselves hadnt eaten for a large number of weeks.

North Korean liquor was sadly lacking in what by the end of the trip became known as NK Disneyland, so us foreigners had to settle for a quiet night in the local microbrewery supping on Soju and singing bad renditions of extremely bad K-pop songs to each other. Not a bad way to make friends, as it turns out: it felt like we knew everyone in the morning. All in all a good day, but Id have swapped it all in a second for being herded around by North Korean guards, subjected to random total body searches and hissed at for the evils of my Western consumptionist attitude. Call me weird, but I like that stuff.