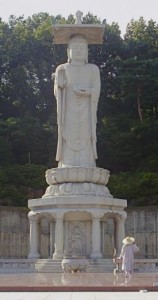 Seoul is madness in the summer. 14 million people congregated into such a small space, all wanting to relax, spend time in the air conditioning and make the most of really limited and often identical time off. It makes for a hectic, sweaty environment. What possessed us to spend some of it in COEX, Koreas biggest shopping centre, Ill never know.

Having overcome that frankly ludicrous urge, Helena, Tak, Kristen and I headed for Bongeunsa, the nearby Buddhist temple. Bongeunsa has precisely the opposite effect to COEX: its serene, lantern filled complex feels like escaping the city all together. Only a couple of hundred metres from the incredibly overcrowded COEX, the temple is far enough from the holiday traffic that despite the back drop of multi-storey skyscapers you can only hear the intense summer mating calls of the insects (about the only creatures enjoying the heat). Its easy to lose yourself amongst the walls of lanterns and grey-clad monks.

Bongeunsa contains a particularly large standing stone Buddha  as featured on the front page of the Lonely Planet Korea  that is somehow placed with a stunning woodland backdrop. The temple was first built in the 11th century, and the stone Buddha  its most impressive feature  seems to be something of an architectural afterthought, planted in the temples backyard and surrounded by small offerings and monks in large straw sun hats. Its all feels very calm, very spiritual and like the best possible follow up to COEX. If only Buddhist serenity somehow tamed the sweltering sun and intense humidity.

Hard Rock Café  our Saturday night destination  gives a similar feel. A heavily air conditioned large-scale underground bar, Hard Rock feels more like Vegas than Seoul. As does The Bungalow: a sandy floored, Jacuzzi filled bar that would fit right in to the sleazier districts of Bangkok. Clearly, when it comes to vacation, I am the king of escapism.

A weekend spent avoiding human-traffic and 35-degree heat gave way to a Monday of frustration. Id forgotten how ill advised it is to try and do anything touristy in Seoul on a Monday. Both my attempt to visit the prehistoric village in East Seoul and (amazingly) the park containing the tombs of some former Kings were met with closed gates (who closes a park?!). Buddhist temples aside, this was a fairly unsuccessful start to my first proper relaxing week in 8 months. I guess watching 24 in bed and chilling it out is not so bad as a way to spend the holiday time to hit the road.