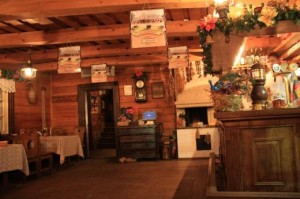 After sleeping for three hours in the middle of the day, Helena and I headed for some food. When you exercise as much as we do you really need to keep you calories up (and I wander where that stomach tire came from!)

Lithuanian Cuisine has taken only two days to register as something pretty special, and our Saturday night meal topped even the boar. We stumbled upon a traditional restaurant just off the town square; a wooden building that looked like it belonged in a ski resort, complete with waiters and waitresses in traditional dress.  I ordered Cepelinai, the national dish, which is a kind of stuffed potato dumpling. It doesn’t sound like much, but it’s so beautifully cooked that the dumplings seem to dissolve on your tongue. Lithuanian beer isn’t bad either: similar to the deep taste of a Czech Lager, with a very raw, hoppy vibe, and served in equally large tall glasses. I certainly didn’t expect to come back from Lithuania raving about the food!

Kaunas nightlife proved to be somewhat lacking, though we did track down a local bar that we could politely call ‘rustic’ – again totally covered in graffiti. Even in a place like that we didn’t meet a single local without at least passable English skills. Many locals didn’t even pause before responding in fast and effective English. One particularly amusing example was in the bathrooms, where a guy started chatting to me in Lithuanian. I responded with my  (fast becoming) customary ‘sorry I only speak English’, and he simply switched languages in order to inform me that Kaunas’ toilets are invariably lacking soap. Respect. 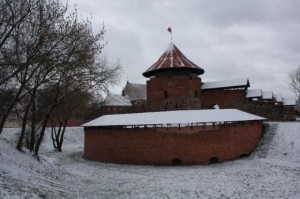 The next morning we woke up late to find a beautiful two-inch layer of snow all over the city. It was pretty before, but watching a wedding in the town square in the undisturbed snow was truly stunning. It was also a whole new level of cold, which meant Helena and I did very little with our final day. An extremely brisk walk up the main street to buy the usual supply of odd local alcohol (always good for a laugh) was followed by an entire day of dipping in and out of the hotel for warmth, sipping coffees and taking photographs of the white out.  Local alcohol included an amusing looking can of ‘gin’ printed all over – ring pull and all – in zebra stripes. Nice.

Our best trip was to the castle – only about 500 metres from the hotel entrance but that was more than far enough. Kaunas castle is a circular brown brick building with a pointy roof, joined to a long defensive wall. It’s not particularly big or imposing (though it no doubt seemed it in the 15th century, when Lithuania was the biggest country in Europe, and Kaunas a key hub). It’s more quaint and picturesque, looking very much like a Disney animation in the snow.

I also wondered round to the ‘Thunder House’  -a small but dramatic gothic structure – along the river and past a few more of the hundreds of churches. It’s all very pretty, but far too cold to enjoy for more than a few moment at a time.

Having said that, two days is plenty of time to soak up the best Kaunas has to offer, and we didn’t feel like we’d missed anything. If anything the late night flights on Sunday just left us drained for another Monday morning.

I have a feeling I’m going to enjoy the easy-access Europe on offer from Dublin, though. Now I just have to make the money to enjoy it!