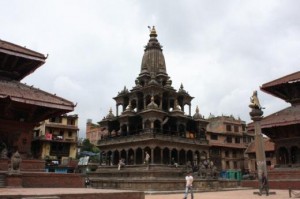 Thamel, the backpacker district in Kathmandu, is sensational. It’s Bangkok without the sleaze, or Delhi + some much needed atmosphere and minus the touts. For several blocks there’s nothing but good restaurants, serving stuff like apple and cinnamon momos (whoever came up with that is a genius), bakeries, guest houses and shops full of some of the best souvenirs I’ve ever come across travelling. It’s seriously difficult not to completely blow the budget out of the water. Throw in a memorable nightlife and a eclectic mix of friendly people hanging around, and I’m finding it seriously difficult to fault Kathmandu. It was a little too hot today, if that counts as a criticism!

On the first day I was in a bit of a daze from a night on the buses, and when I did make it out of my room I decided to just wonder aimlessly and see what happened. By pure coincidence I ended up in Kathmandu’s most famous tourist attraction, Kathmandu Durbar Square (arguably the biggest, anyway, Kathmandu valley is actually the site of a whopping seven world heritage sites – that’s got to be giving even Rome a run for its money!). The valley actually has three Durbar (meaning palace) Squares, and Kathmandu’s is perhaps the busiest. Sitting on the temple sides and watching the world go by is something you can do hassle free. The odd motorbike aside, the square looks pretty similar to how it must have when it was first built, with stunning temples dotted around the place and yellow garlands of flowers draped over the cow statues that guard the square’s entrances. 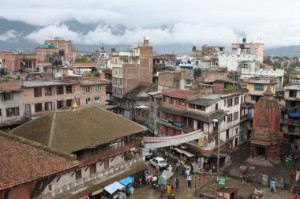 I met a man called Sang Ram Lama on the temple steps. He’s a trekking guide, and working for ridiculously low prices as its off-season. This is a point when I’d run a mile with the word tout bouncing around my head in India, but hundreds of letters of reference (all in flawless, native English) and his friendly attitude won me over. I’ve already met him three times since, to check what I’m carrying and grab a quick drink. Of course, there’s still a small chance that he wont turn up in the morning, and instead he’ll disappear with his deposit, but I can’t see it happening. In India it would be a banker. $15 a day for a 9-day trek to Langtang National Park (though I’ll still have to pay for food and hostels, but he’ll be paying for his). Bargain, as the trekking stores are quoting the same trip at more than double that. Annapurna is a no go unfortunately, due to avalanche risk.

Next up it was time to call Bikash, my new Gurkha friends Royal Marine brother. For a guy who’s never met me, Bikash was incredibly friendly. On my second day in Kathmandu he took me to Patan (and an even more beautiful Durbar Square), and then insisted on paying for all the beers while I watched the Andy Murray quarter final with my new Scottish friend. Another great thing – it’s impossible not to make friends here. Just joining a table in the guesthouse courtyard on the first night turned into a drunken late night drinking session with three lads of assorted nationalities. All interesting people, and the social side of travelling suddenly seems alive again. It seemed to have died in India.

I have been doing a smidgen of budget blowing: a beautiful traditional Nepalese knife, a set of prayer flags to hang in the living room when I get back to Ireland and a present for my girl (two weeks is already far, far too long, and I know she’d love it here, which just makes it harder).

Two days in Kathmandu, and it’s up there with Prague, Hampi (South India) and wherever Helena happens to be at the time as a place that I’m never ever going to be unhappy to be heading too. What a great city!