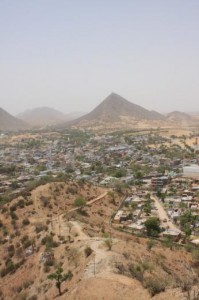 14,000 people. 500 temples. 52 ghats. No lake. It’s probably a sign of the level of the heat wave out here right now that Pushkar’s most famous attraction, the small lake ‘formed from a single tear of Brahma’ – and now the only place in India where that particularly Hindu God can be worshiped – is now simply a dust bowl surrounded by some very ornate steps. The occasional truck cruises around and digging out the dirt from the bottom, and a small section is left for washing and prayers, but 80% of Pushkar lake lies empty until the monsoon hits in a couple of months. Pushkar’s almost totally tourist free too: we’ve discovered over the last few days that nearly all of India’s large traveling community has headed up to the mountains to get out of the heat. We plan to follow them just as soon as Helena’s research is over.

Pushkar is a highly religious (Hindu), vegetarian and semi-vegan town that doesn’t serve any alcohol. For the sake of our stomachs, we had planned to be vegetarian for our entire time out here anyway, and the rule on alcohol seems to be one that every restaurant owner’s willing to bend to make a few more bucks. It seems a shame really; we chose not to indulge. We sample Pushkar’s most famous drink though. ‘Bhang Lassi’ tastes like drinking blended cucumber and yogurt and claims to be an ‘aid to meditation’, which in reality means it’s a mild sedative. It leaves you in a slight daze for a few hours but otherwise doesn’t do a whole lot.

We spent our three days in Pushkar being as chilled out as possible, trying to stay hydrated and get at least a little used to the heat. We found a cheap hotel – £3/ night – with a pool (probably taking up a large part of Pushkar’s water supply, but it felt so good it was hard to feel guilty), and spent a large part of our stay in and out of the water and making the occasional trip into town in the mornings and evenings.

One evening we went for an Ayuvedic massage and I had a shave with a cutthroat razor in a backstreet barbershop, which was a surprisingly relaxing experience even in the heat. The barber mixed multicoloured soaps on our faces, whisked them around and made a (probably brown, from the dust) paste that left the skin really smooth. Then he did a full face, head and back massage before asking us to ‘throw away’ our bad energies, doing the same with his hands. It sounds ridiculous but it seemed to work! 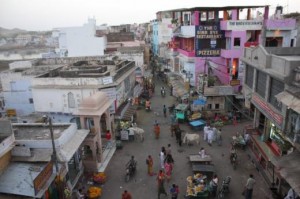 We were chased down for the usual Pushkar blessing, which the locals are now performing in a tiny pool of water left at one side of the lake, where they get you to repeat various Hindi phrases and drop flowers in the lake. It’s a fairly obvious con, but one that’s easy to get round by offering to put money in the temple donation box rather than giving it to the ‘holy men’. When they’re unhappy with that, you’re left with plenty of reason not to give money at all.

One morning I walked up to a hilltop temple in the blistering heat, and scolded the soles of my feat on the burning concrete inside the temple (you can’t enter a Hindu temple with shoes on). There was a Saddhu sleeping inside with his dog, snoring loudly, and a view for miles out in to the Rajhasthani desert. Coming back to the pool afterwards was pure bliss, and pretty much the only escape from the heat.

I love Pushkar, it’s such a slow-paced, relaxed Indian experience, a town full of cows, camels and ornate temples that operates at such a lazy, drifting pace you could easily hang around a few weeks and just watch the world go by. The heat this time round made it almost intolerable, but I think we’re slowly adapting. We didn’t have time to let the world spin around us; we’re now camped out in Ahmedabad sucking up the big city heat. Helena’s research starts today, I plan to visit some sights and put together a couple of articles. 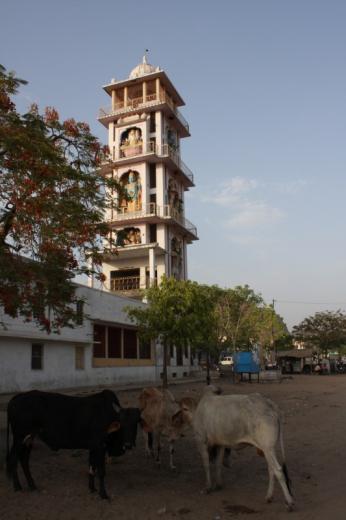 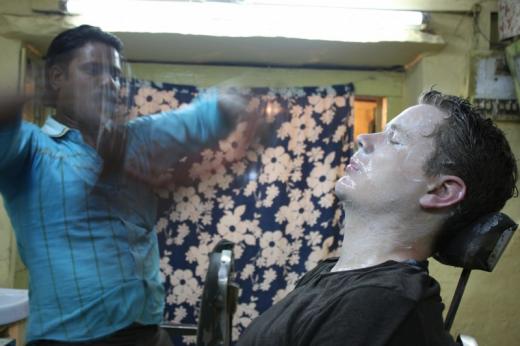