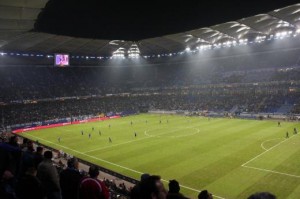 In the pre-game interview Villa manager Martin O’Neill told the press he cared ‘not one jot’ what happened in the game against Hamburg. He then backed this up by bringing a 20-man squad that excluded arguably the five strongest regular first team players and including a host of youth team players. I can only assume he meant it.  It’s a little frustrating, as 50 Euro plus train tickets is a lot to pay to see what is essentially Villa reserves, but I can’t say I’m surprised. With so many games in the season and both sides having already qualified for the next stage, he might have let the fans down in the short term, but no one will be complaining if the rest of the season goes better as a result.  It’s not exactly a priority.

Despite the absences the game had the atmosphere of a big one the moment I stepped off the train in Hamburg. HSV fans were already making plenty of noise on the station bridge and riot police were lining the paths chatting away and drinking coffee: even they seemed to realise policing what essentially amounted to a friendly game was a pointless exercise. 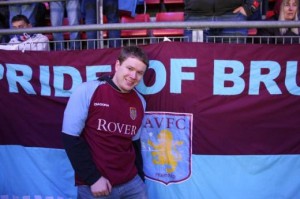 My plans to see a bit of the city for a couple of hours were quickly abandoned in favour of joining other Villa fans in heading to the stadium early to get a few pre game beers in. In hindsight it might have been too early; we all forgot the games kick off an hour later here, and found ourselves with three and a half hours to kill outside the ridiculously named HSH Nordbank Stadium. Even with copious amounts of Gluhwein that’s far too much. Luckily we quickly discovered an international ice hockey game taking place next door.

Germany vs. Switzerland also didn’t start until pretty late, but we got a whole third of a match and a warm Pretzel in before moving over the road for the football. Both sides spent most of the game slamming each other into barriers, and failed to get anywhere close to scoring a goal. The guy next to us was banging a drum and shouting with his three friends so loudly we probably would have left after a third anyway. I don’t think it counts as a chant when there are only four of you! We heard later that Germany lost 2-1 in the fourth (extra) period. Glad we didn’t stay for that, the four man chanting team might have lost it!

I got into the Nordbank Stadium about half an hour before kick off, smuggling my Villa shirt into the home end in the bottom of my bag and trying carefully not to give away my lack of German to the security guards. The Nordbank is an impressive arena, holding 57,000 and full to the rafters with blue clad fans. We quickly learnt that Hamburg were taking the game a good deal more seriously than Villa – perhaps looking to their long winter break right after the match – and had put out a full first team. The Villa line up contained only three of the players who started the last premier league game. A bit of a pasting seemed inevitable. 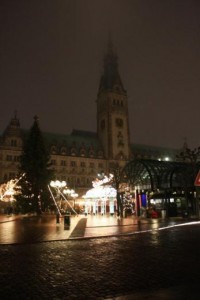 Half an hour in and Villa were two down, and it had the potential to get pretty embarrassing. The two Croatians up front for Hamburg look really good, and the reserve defence wasn’t getting anywhere near them. It stayed that way until half time, at which point I got bored of keeping quiet amongst the German fans, and persuaded security to let me across the divide in amongst the Villa fans. The second half was much more fun.

Apart from a handful of away supporters – who were wound up about paying so much to see the reserves – the Birmingham contingent made a lot of noise, and didn’t seem to care too much about the result either way. Hamburg got a third early on in the second half, and continued to pepper the Villa goal until Nathan Delfounseo scored from a deflection from what must have been on Villa’s second or third attack, causing inappropriately wild and sarcastic celebrations in the away end. Two goals in two professional games for the seventeen year old, we might have a good player there.

Towards the end Murphy’s Law came into play: of all the players on the field, there was probably one we didn’t want anything to happen to, Steve Sidwell, who’s been on great form recently. He managed to get himself sent off for a pretty ridiculous last ditch tackle on Hamburg, which did stop them from scoring a fourth goal, though I don’t think anyone would have cared if they did. He’ll be suspended for the next round.

All in, the away games are quite a party, and going down 3-1 doesn’t make a whole lot of difference when both sides have already qualified. Though it does mean Villa get CSKA Moscow in the next round, which is far from ideal.

I ended my night stuck in a German station until 3.15am, and rolling back in to Hannover for a couple of hours sleep at around 5.30am. This seems to be a recurring theme; I’m going to have to get some serious rest when I get back to Ireland. Still, it’s not every day you get to see your team play away in Europe. Good night!