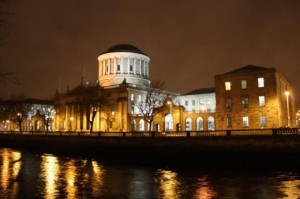 Irish pubs seem to be every bit as special as they’re made out to be. Even the decrepit local at the end of Smithfield Square is a rustic work of art, plastered in posters from traditional concerts gone by. A quick glance around reveals a host of things you’d never see back home: a fiddle festival, going on for a whole weekend and featuring a host of names that just have to be Irish; a set of chairs near the entrance labeled ‘reserved for Musicians’, and an area to sit and respectfully listen; bathroom doors labeled only in Gaelic, without the slightest symbolic indication of which gender is supposed to frequent them.

My time in the ladies bathroom fortunately seemed to pass unnoticed (‘Mna’ – Gaelic for woman – looks far too much like ‘man’ for my language addled mind to deal with), and my first ‘old man’ Irish pub experience passed without much incident. By the way, yes, Guinness does seem to taste different in Ireland: richer and far more palatable. Still not my favorite drink though, but then it doesn’t seem to be the locals either… 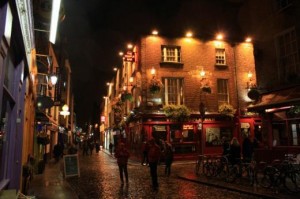 I must admit that my time in Dublin so far has been a somewhat lonely experience. Helena is extremely busy, people back in Seoul and the UK have been (predictably) bad at staying in touch, and Ireland will never have the same kind of protective expat bubble that I so happily drifted about in over in Seoul. I’m realizing more and more that I’m really going to have to go out of my way to meet new people: club’s, friends of friends, whatever it takes to get a social network back around me. I’m not one of those people who can live without that, and it’s something I’m really going to have to start putting effort in to.

Having said that, work so far has been superb. The people are extremely friendly, the classes are more laid back and less intensely scrutinized than Seoul, and the hours are just right in terms of both making enough to get by and giving plenty of time to do other things. Speaking of which, I really need to get a shift on with my writing (for places other than right here, that is).

There’s some interesting stuff coming up, at least. The weekend after this one I will be in Kaunas (for the geographically challenged, that’s the second city of Lithuania… ), and Berlitz are talking about sending someone to Hanover for a couple of weeks in December (their office is really busy, ours isn’t), which is certainly something I’ll be looking into. I’m starting to think about possibilities for next summer too – a quick tour of North Africa is almost a certainty, and I’m pretty sure I’ll throw something else in there too. We shall see.

Anyway, off out tonight for another Buckfast experience (dangerous territory!), as well as a good look at the inside of a few of Dublin’s fine institutions. Plenty of reasons to smile!