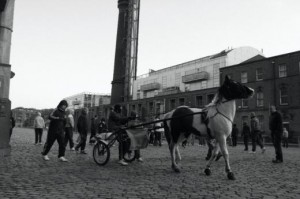 That was quite possibly the shortest Galway trip I’ll ever make! Helena and I headed down at lunchtime on Friday, and I had to get up and come back to Dublin to teach early on Saturday morning. It was actually a great trip. We took a tour around some of Galway County, dropping into Ashford Castle in the rain as the sun went down and then heading for the interestingly named ‘Cong’.

Ashford Castle is now ‘the Ashford Castle hotel, but it’s seriously beautiful none the less. A lot of the stone walls are totally coated in ivy, the turrets form a stark outline against even the most miserable of skies and the castle grounds are surrounded almost totally by lakes that stretch off sea-like into the distance. Galway is incredibly wet, and Ashford Castle is the wettest part of it I’ve seen so far. It’s dark and dingy, but I’m obviously not alone in thinking that it’s also extremely beautiful: Pierce Brosnan got married here. Some of the rooms cost more than 1000 Euro a night. (http://www.ashford.ie/).

Right next to Ashford Castle is ‘Cong’, a pretty little village with a pretty stupid name. When you live somewhere so permanently moist, painting the buildings in various pastel colours is probably a good idea, and Cong is beautiful because of it. We only took a quick cruise through, but it seems to be very quaint and Irish, and well worth a look. Cong, Ashford Castle and a few beers in front of the tele in the evening were pretty much all I got up to in Galway, but then again that’s not bad for about 20 hours. 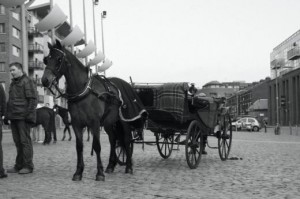 Being back in Dublin on Sunday, I thought I might as well check out the Sunday morning horse fair at Smithfield. Being about two hundred metres from home, I was starting to run out of excuses! The horse market is a bit of a throw back to old Dublin.  Held in between a set of executive flats and a 4-star hotel, having a whole load of shabby looking horse rolling in once a month seem a little odd. It’s plenty of fun though, with the horses charging up and down the cobbles pulling little carts and the traders full of sarcastic one-liners. I’m not sure if anyone actually bought or sold a horse – if they did then I didn’t see it – but it was good for a bit of fun none the less. Especially the two teenagers who were attempted to swap their cage of chickens for a particularly large mare. They failed.

I started my writing course on Thursday. It’s great to meet a few people who are trying to do a similar thing to me. The class is small and the teacher is very willing to help out and hand out some useful contacts, hints and tips. I’ll be missing it next week with the wedding location hunt in the south of Spain, but I think that’s a sacrifice I’m prepared to make!

This weekends Fortune Cookie said ‘success will come your way in August’. I’m pretty sure I’m going to be in India in August, who knows what I’m going to achieve there! Not that I believe in these things…

Published Articles to date: 7/100. I also have another 4 with the editors, confirmed and waiting to go into print. I guess my ‘count’ is going to jump around at the start of every month, but my high target of 100 is not looking too unobtainable.  I’ve stopped posting articles on here (unless they’re unpublished and I feel they’re worth reading!), so if you want to have a look scoot on over to here: http://jameshendicott.blogspot.com/.