The previous weekend is actually my only one in Germany. Although I’m here for three weeks in total, a Dublin engagement party and unwillingness to disappear for too long mean a long journey back to Dublin via Frankfurt next weekend. Good thing I made the most of it then.

After a quiet Friday, Anthony – who I met in a double class, and teaches in Berlitz Hildesheim – was kind enough to invite me to join a party with his basketball team. Hildesheim is a small town full of ancient churches about half an hour from Hannover. I saw next to nothing of it on Saturday. I did get to see how Germans party, though, and it was really quite impressive (be patient, we’ll get to the reindeer!).

The hosts had hired a large hall in the city centre for the night, filled it with crate after crate of strong tasting local lager and good food and pumped music out until long after we were ready to come home. A potent bottle of Bloody Mary in shot form was doing the rounds as well, how they make the stuff that strong and keep the tomato taste is a little beyond me. Combine all that with the efficient German distribution system for the Jaegermeister and it turned into quite a drunken one. Fortunately, just when the alcohol’s starting to get a little much, there’s a large boiling pot of water filled with Frankfurters to settle the stomach.

Not for the first time, I was totally blown away with German’s English. The number of people who tell me they haven’t studied English since school, but can communicate at a really quite sophisticated level is stunning. I spent Sunday sleeping off a hangover, and working on some article, which seems a shame when this is my only weekend, but deadlines left me with no choice.

On Tuesday I hit up the Christmas markets. The ones in front of the station were impressive, but getting a tour from one of the Australian teachers revealed just how much I’d not hunted down yet. Street after street of old wooden beamed houses lean up against each other for a huge area of the city, and the Christmas markets go on down every street for at least a square mile of the city centre. I finally sampled Gluhwein, which is like a very sweet version of mulled wine. It’s a little too sweet for my taste. 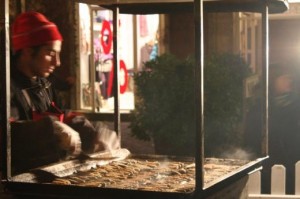 We started in the traditional market, which sells huge ginger bread hearts, 50cm long Bratwurst, a huge variety of punches and more Christmas decorations than Hannover could possibly need. In the quieter corners you can find small wood fires, which people flock around to sip on their drinks. If you look really hard there are a few longhaired dogs with barrels around their necks as well.

Further on you come to the Finnish market, which is an entirely different experience to the German parts. The Finns come down here every year, and cook up huge numbers of Salmon and Herring on grills for the hungry locals. There are so many Finnish flags hanging around it stops feeling like Hannover. Tucked away in one corner is a stall selling Reindeer sausage, which is just an irresistible proposition. Even better, you get to eat it in a huge brown teepee around an open fire. You’ll be pleased to know that Rudolph tastes excellent (I except no responsibility whatsoever for undelivered presents this Christmas!). What a great experience.

The teaching is good here. It’s lively, people are eager to learn, and they’re generally good enough to hold a conversation, which makes things a lot easier. The travel classes – which meant a walk down the road to another office in Korea – are a good distance away, and the only one I’ve had so far gave me the chance to see an interesting little piece of Germany.

I taught at a company in Hameln, home of the Pied Piper. It’s a beautiful little place, with a crashing weir and churches and castles along the riverfront, though I only saw it in passing. Predictably, pretty much every pub is named after the piper. Tomorrow Ill be back in Hildesheim to teach in the morning, and hopefully Ill be able to see a bit more of it than last time.

This evening I managed to book myself some tickets to go and see Aston Villa’s away game at Hamburg on the 17th of December. It’s an early Christmas present to myself. I’ll have to sit amongst the Hamburg supporters, but I’m sitting in a corner of the ground near to the away fans, and banking on the fact that the games meaningless (both teams have already qualified) meaning I get away with it. We shall see.

It’s been an eventful week! A couple more days of Hannover, then it’s back to the endless stream of flight again. I can’t wait to spend a couple of months on the ground after Christmas!