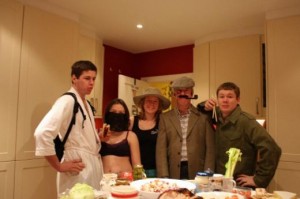 Another year’s annual gluttony fest has passed, and once again I feel like I’ve already consumed the next years worth of calories and need to start exercising to divert a fast approaching heart attack. My liver’s not in the best state, either. Still, I wouldn’t want it any other way.  I wasn’t at home for Christmas last year, and the chance to catch up with family and friends was sorely missed. I doubt I’ll be there next year, either, so best to make the most of it.

Boxing Day (which I’m fast coming to know as ‘St Stephens Day’ – that’d be the Irish influence) was probably the highlight of the week. After introducing Helena to my best man to be, and watching Villa grab a well-deserved last minute draw against Arsenal, we spent the evening consuming vast quantities of rum and playing a murder mystery. The oddly named characters – mine was an extremely dodgy tax-dodging security guard, complete with suitable Essex accent (which I may have invented myself… ) – were created with comedy in mind, and the game left very few clues who actually did what. Helena managed to convince everyone she was the murder, but turned out not to be, while Jim sat in the corner subtly wielding his pink feathered poisoned arrow. Metaphorically speaking, of course, though there were some pretty ridiculous costumes involved.

Christmas day itself was the usually slightly hung over binge session; complete with Christmas stockings in bed (our quaint family tradition, which makes me smile) and huge roast dinner. The presents are always great and entertaining in almost equal measure – socks and magazine hand outs always make me laugh (there is a usual culprit on the magazine hand outs, but I wont be mean enough to name them!), I was quite amused by the can of Bratwurst I bought my brother as well (not all I bought him, of course!). 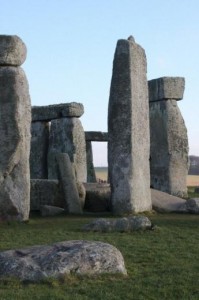 We also did the Salisbury tourism thing. It is a surprisingly attractive place when you start to look at it in that way, though still more than a little on the dull side. I took Helena to the Cathedral and we all dropped in to Stonehenge, which was colder than I’ve ever known England to be.

I arrived back in Dublin on my 14th flight of the last three months, which probably goes some way to explaining how exhausted I was. We headed for the West of Ireland the next day, where I spent an entire day lying on the sofa feeling like I’d been hit by a bus. We travelled around a little bit, seeing Helena’s family and for a leaving party, but I was pretty much too tired to take in any of it.

New Year was a good night, a house party in South Dublin with a group of people who I’d only met a few of, but it was suitably drunken and enjoyable. Only just getting over that hangover now.

New Years Resolutions: These will no doubt last all of a week, that is the usual, but I can’t resist making them anyway. I’m going to make my main aim for the coming year to push my writing forward. I want to get some articles in a few bigger magazines and newspapers, and build up a serious portfolio that will make me a more attractive prospect for freelance work and permanent jobs. To try and motivate myself, I’m going to tally my published articles on here every time I write, which should stop me from slacking too much. I’m aiming high: 100 published pieces for the year seems do-able.

Article Tally for 2009: 3/100. First three: ‘Vomit’ Column for Bling Magazine (South Korea – see recent entry); We Need Surgery Interview for Bling Magazine (South Korea); Gaeseong: One Way In, One Way out (for Romar Traveler, American web travel log on ‘ a world less travelled – see previous entry. I’ve noticed since posting my last entry that this is disappointingly Americanised and badly edited, which hasn’t done me any favours, but not a lot I can do about that).

Complete but not yet published: ‘Seoul’s Dogs: Friend or Food’ for K9 Magazine (UK – completed in November, see earlier entry)

I’ll be resisting putting them all up on here, as that’s not really what my blog’s for, but keeping a tally will make me feel like people are watching me, and so pressure me into working more. That’s the theory anyway. I’m hoping to learn a bit of Spanish this year too.