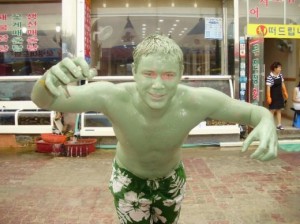 The summer event calendar that keeps us all entertained throughout July and August is officially here, and despite a list of side effects that wouldnt look out of place attached to a prescription, Boryeong is a great way to start. After all, can there be a better readily available combination than sun, sea, mud and huge beach parties?

We took a bus to Boryeong  about two hours South West of Seoul  in a group of about fifteen at 8am on Saturday morning, in the midst of a worryingly torrential downpour. By the time we arrived it had temporarily subsided, so we headed straight for the beach side festivities. Boryeong has a small town centre square which overlooks a couple of miles of beach, and for the mud festival its crammed full of the kind of things youd normally find at a water park, though theyre all used exclusively with mud. There are mud swimming pools, mudslides, mud-coated prisons and of course, the obligatory mud wrestling arena.

In the mud pools locals play games in which the losers sit in the middle and get totally bombarded with thick muddy water, and the mud prison involves clinging to the bars whilst being pelted with thick clods of mud. Its all pretty crazy, and pretty painful on the eyes and ears at times, but spending the day in and out of the sea and the mud cover equipment is perfect for dealing with Koreas summer heat and humidity. 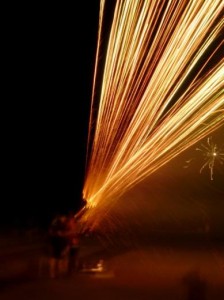 By the early evening we were exhausted, and after staking claims to various parts of the pensions Ondol floor system (we all stayed in two huge rooms for the weekend  about the only way Boryeongs mud festival accommodation is affordable), we found a bar overlooking the action and got the part started. Well I say started the whole day was liberally punctuated with convenience store beer, but we stayed relatively a calm until the evening.

The mud festival is almost as infamous for its Saturday night parties as its mud, and having missed out on them last year (I only went for the Sunday), I was determined to make the most of it this year.

The party pretty much takes place on every part of the huge beach, though its centred around a large stage where the festival lay on an R&B rave (it seems to have passed them by that a rave and R&B are highly incompatible). Down on the beach huge groups sit around drinking and torturing the fireworks patrols, who try to prevent everyone setting off huge quantities of Roman Candles throughout the night. The guy nearest us lead a particularly tortured existence  he had a large area of beach to cover and we consistently fired off fireworks at the same time or right after someone else so he couldnt deal with the overwhelming numbers  really entertaining for a couple of hours watching him sprint around after them all. The whole safety aspect of it was pretty hilarious too  for safety reasons the guards took the completely safe fireworks pointing into the sky and stamped on them, causing huge explosions on the ground. Bizarre.

By the time we got bored of that it was about midnight, and a good time to check out the R&B rave which was busy but consisting of truly dire music  perhaps not a big shock. The laser show, and the opportunity to stand around in several inches of mud is too good to turn down after a few drinks, though, so we got in the thick of it anyway and stumbled home about half two. 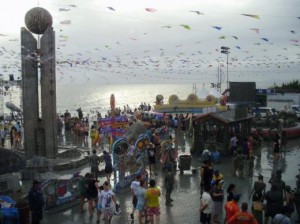 On Sunday I couldnt resist the chance to try out the festivals new theme: colored mud. Helena painted me green from head to toe, which is a guaranteed way to have every single person youre near stare at you and want to take photographs, but great fun.

By the time we had stuffed ourselves full of pizza and fried chicken and made a conscious effort not to get even more sunburnt than the day before, a painful trip back to Seoul (Im so burned sitting down hurts) and an early night were called for. Next weekend: Pentaport music festival. Im doing everything for the second time this year, but it doesnt make it any less fun! Laters!