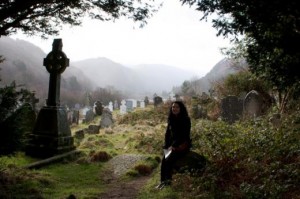 So you’ve all missed me, right? Well, perhaps one or two of you have wondered where I’ve disappeared to, and why this blog has been left standing for perhaps the longest stint in its history. I’ve been insanely busy, and I’ll do my best to fill in what on earth’s going on. As I’m almost certainly going to be following this post with another two in the next day or so, you’ll have to read fast…

I’ve been back to the old routine the last few weeks, though with a massive tempo increase. The writing’s coming on really well. Right after getting back form Glasgow, I interviewed Ian Watkins from the Lost Prophets, a band who I’ve basically ignored for the last few years but I used to love as a live act. He seemed a very sound guy. I still haven’t got around to writing that up (it’s recorded on my computer, waiting), which is a sure sign of the busyness, really. I was meant to interview Corinne Bailey Rae, too, but that got cancelled at the last minute. C’est la vie.

I’ve been gigging like crazy. Two weeks ago I saw an incredible Haiti relief gig with Jape (who is by far the standout star in Dublin in my opinion), along with a few others at Whelan’s. I’d pay fifteen Euro just to see ‘I Was A Man’ live. The day before I went to see Portico Quartet – who play a strange twist on classical music, shoegazer ish with some clever rhythm on hang drum – play in Dublin Castle. The last time I saw them they were playing SOAS Student’s Union back in 2006, and they’ve not changed much, though they were better in front of an crowd of student hippies. On top of those, I’ve been to see Xavier Rudd and The NME Tour starring The Maccabees and Two Door Cinema Club (click to read reviews, to save me summarizing!) over the last few weeks. I have some even better stuff coming up over the next couple.

Last weekend, Helena and I did absolutely nothing, in part because we were just so tired from the sheer volume of teaching/writing (on my part), charity launches (on her part) and general late night shenanigans to be bothered to get off the couch. Though I did get a photo lesson on Sunday from Kieran, a State photographer whose quickly becoming a good friend. I really need to learn my basic settings. The weekend before was Valentines, of course. We needed to hire a car anyway to go down to Mayo and collect the TV (too much of a pain to put on the bus – we’ve actually decieded not to get any channels. No time to watch them anyway, so it just sits in the corner and plays DVDs every so often), so we kept it for the Sunday too, and went for a cruise around Wicklow. 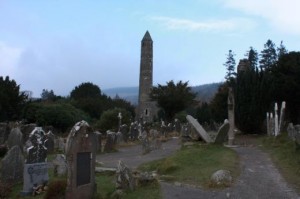 We started in the beach in Bray, which is pretty, but not as impressive as you expect from all the talk of it – one for the summer, perhaps, then on down to Glendalough, which is apparently the most visited tourist attraction in Ireland. It’s nothing but a tiny stone village set amongst endless tombstones with a lake in the background, but it is free and nice to walk around so no complaints. The round tower in the centre was pretty impressive, though it’s hard not to imagine the local lads having a few beers and getting stuck inside it. If anyone actually lives here, that is…

Next up we went for a quick cruise over the Wicklow Gap. That place makes me want to walk around in the mountains a whole lot, even when it’s coated in fog and the road’s littered with animal remains. It will have to wait for the summer, but a major trek through Wicklow is definitely on the cards for me at some stage. There’s talk of an Irish ‘four peaks’ doing the rounds, too, so it could be a busy, outdoor kind of summer.

For the romantic evening side of things, we went for salmon, strange flowery stuff scattered all over the floor and plenty of Bailey’s coffee. I hope that counts as effort. I think it does.

This week’s been something else, so I’m going to come back tomorrow morning with a day by day run down and a preview of the slightly ludicrous antics that will be taking over the coming weekend. Until then, you’ll have to put up with the gaps in my memory, it’s been a mad few days. I need a holiday!