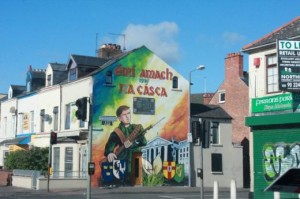 Sunday morning quickly revealed the only thing I didn’t like about Belfast: the roads. I’ve actually never come across a city that’s so badly signposted, and I include Kathmandu (which gets round the need for signs by putting maps on roundabouts – very useful for driving) in that. It took us an hour to get out of town, which was not fun with a mild hangover. Having said that, we had already had the mother of all buffet breakfasts in the hotel by then, and the drive did take us into the Republican parts of the city, where some of the murals are amazing, and there are a lot of them. As we drove out of the city, I finally fell victim to the ever-present police force, who pulled me over, waited for me to wind my window down, and politely asked me to mind the runners after the next junction. Perhaps there were just a lot of amateur athletics events on all over Northern Ireland this weekend… 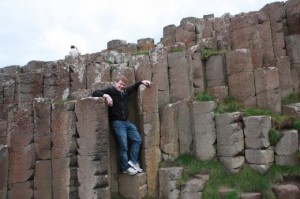 The first stop was going to be Giant’s Causeway, but the nice lady we bought our lunch from told us about the Carrick-e-Rede rope bridge, a few miles before the causeway, and it seemed a shame not to check them both out. The rope bridge is near the pretty village of Ballintoy, and swings gently over a 30-metre gap between the mainland and a tiny, craggy island (no, not Craggy Island from Father Ted, unfortunately). Until recently the bridge – built by fisherman to get access to a migrating salmon route – had only one handrail, and was more than a tad flakey, but now the National Trust have put a cage around it all, which makes the wooden slats far more palatable. The other side is just a grassy slope and a lot of steep cliffs, but has some great views.

In fact, the sea off the coastline was impressive all the way along. From the car, we saw some very picturesque ruins of forts and churches, while some parts had what looked oddly like cliffs that have collapsed backwards into the water a few hundred meters offshore; just long and narrow spits of land parallel to the beach. 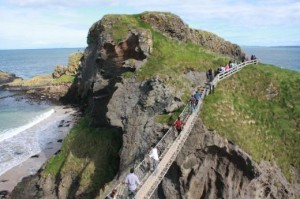 Giant’s Causeway was really busy (Sunday afternoon in summer, I guess), and much smaller than I expected. The hexagonal rocks suddenly start appearing everywhere – in the famous patterns stretching out to sea, in huge lines in the cliffs, and in some places sticking straight out, too. It’s bizarre to think that’s it all natural, and a great place for photography, but in all honest a little underwhelming. Which is a shame, for something with such a big reputation, though the rugged shoreline around it was worth seeing.

The drive back was a real mission, we eventually got into Galway at about 9pm and went straight to bed. On the way we stopped on Derry, though we didn’t actually realize we were in Derry until we asked the waiter in the restaurant where we were. We ate in a shabby 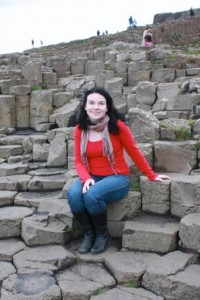 looking place that turned out to be very nice, called The Garage on Queen’s Quay, and watched the final few minutes of the Gaelic Football final, before struggling back through tiredness.

A long way to go for a weekend, but it was a really good trip away; I was definitely pleasantly surprised by Northern Ireland. It’ll have to last for a while, though, as it was a real blow the budget kind of trip, and my freelance writing income is far from huge. Helena also has a second internship now, so she’ll be in Dublin for three days a week, and working in Galway the other two. Hard work, but worth it for the experience I think.

I’ll have to have my fun in Galway, and try and save some money.

Back to the writing!