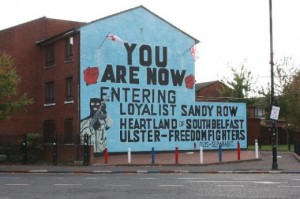 On Friday night, I was lucky enough to catch Super Extra Bonus Party (stupid name, wonderful band – click for full review) at Roisin Dubh in Galway. The five of them sound like the Prodigy crossed with an instrumental punk band, with both a barrage of guitars and an impressive live remixer (all hands in the air and leaping about while he twiddles his decks), and it’s seriously infectious. Sean and I have got in the habit of watching a few of the free gigs down the road, and most of the bands have been pretty unimpressive, but Super Extra Bonus Party – who are arguably the darlings of the up and coming Irish music scene right now – dragged in a huge audience, played like they meant it, and seemed to have a lot of fun doing it. Top if off with them sounding fantastic, and you’ve got a band with huge potential and a great night out. The perfect start to the weekend.

Saturday morning I was up early, and off in to town to pick up the hire car for Helena and I to head off on our weekend trip. We left for Belfast at about 11, on what it turns out is a very hefty drive. When you cross the border into Northern Ireland, the only way you know anything’s changed is a sign saying the speed limits are now in miles per hours not kilometers per hour, and a massive increase in police presence. The 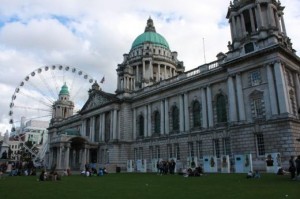 police in Northern Ireland block the roads all over the place; we must have been through a dozen checkpoints over the two days. Why a fairly young guy in an Irish registered car didn’t warrant stopping, I’m not quite sure, though. I’d have thought I was a prime target.

It’s difficult to have a positive image of Belfast before arriving, so – stupid as it is – I was more than a little surprised by just how picturesque it is. Our hotel was sat 30 metres from ‘Loyalist Sandy Row’ (see picture of the wall mural, which was a pretty interesting find), and surrounded by Union Jacks as well as a 24-hour armored (and armed) police presence, despite only being just outside the city centre, but that was about the only signs of ‘the troubles’ we saw. The city centre is beautiful, full of old columned buildings, a good selection of shops and a nice ambience. We wondered around the shopping centre, before heading to Café Volauxvant, an amazing café with palm trees, odd lighting and really impressive seafood. It was only slightly ruined by a band playing at really high volume for the last half an hour (which totally stopped conversation), but we enjoyed it anyway, and got round it by moving on to the pub.

Via the Belfast big wheel, that is, which is next to what looks like the City Hall, and has impressive views over the city. It’s a similar design to the London Eye, though on a much smaller scale, and if it’s not too busy you can have a heated gondola to yourself. We managed to catch it just as the sun went down over the surrounding hills and the odd bubble structure that makes up the roof of the nearby shopping centre. 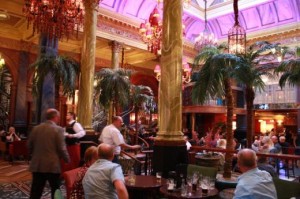 Belfast is incredibly cheap, at least compared to the Republic of Ireland (a bottle of wine for less than seven pounds, you’d just about get a glass for that here), and the locals were pretty friendly. At least I think they were, though the guy we were chatting to in the bar was almost impossible to undertsand, so most of the time I was just nodding along. The average sentence went something like “I cagou thatoonarrinehar tusi Luton Town whaaaiwayooong yunu, so it is”. Absolutely, my good man. He actually was talking about Luton Town at one stage, though I have no idea what he was trying to say about them. Jaysus. We eventually escaped to a quieter pub where we drank rum and coke (a nice change, as it cost far less for two in Belfast than it does for one in Galway), and listened to a cover band that seemed to have the sole aim of entertaining extremely large women with thin legs yet stomachs the size of small sheds, wearing short skirts and luminous pink tops. Very…um…. Picturesque. Cough.

So is it more English and Irish? In all honesty, it’s really not a debate I want to get into, suffice to say that there are definite aspects of both, and – being perhaps less sensitive than I should be – I think that’s actually a good thing in terms of the atmosphere of the place, though that’s probably a very naïve view. Obviously, the city’s suffered massively for it. We went to bed both surprised by how taken we were with Belfast, and very happy, ready for a big day on the road.