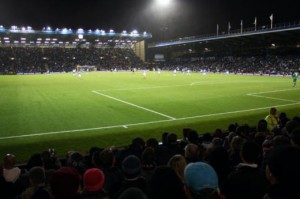 It would be a real waste to miss a Carling Cup Quarter Final, especially when it’s happening an hour down the road, the tickets are a bargain and it’s against a team villa were all but guaranteed to turn over. Let’s face it, Portsmouth FC are more than a bit rubbish, but I haven’t been to a Villa away game since Hamburg last December and away games are always best. Fratton Park’s a strange stadium, penned in by tight little alleyways with one end – the away end – propped up on a slope. If I didn’t know better, I’d say it’s ripe for hooliganism, though fortunately that doesn’t seem to be a concern for Villa.

The best thing about away games is always the atmosphere; there’s a sense that everyone’s traveled so far, so you may as well sing your heart out and try to make the home fans look bad. Which in all honesty wasn’t that hard in Portsmouth, so much so that I got a few compliments from the home fans on the way to the station, having decided leaving my shirt on didn’t pose too much of a health risk. Villa won 4-2, and Stewart Downing looks fantastic, let’s just hope he doesn’t get his customary injury too early. Great night out, though the away seats were more cramped than a RyanAir flight.

Aside from the football, my main ‘break’ in the work/gym/eat/sleep routine came with a ‘trip to Southampton’ to watch a friend hardcore band last week. We got about ten miles out of town before learning that the lead singer of the main act was in hospital, and the show was off. So much for a night out. The rest of the band seemed nice, though, suitably unpretentious in talking about their own music, which they basically agree is just lairy noise, though its noise they love making. Not bad for a band that’s just signed a US record deal. I was actually pretty disappointed I didn’t get to see them, it’s been years since I’ve been to an intimate, heavy gig. I tend to go for the more mellow side of things these days.

I had to write one of the hardest letters I’ve ever written the other day, to a friend of mine (he’ll deliberately remain nameless) who has found himself in prison in Korea for sending himself hash cookies. Now personally, I think the whole thing is relatively harmless (I mean in the UK you’d get a mild slap on the wrist and be told not to do it again or at worst a caution, I think), but in Korea it’s a pretty serious offense, and he could conceivably find himself in prison for as much as five years, though of course we’re collectively hoping he’ll be sent right back from whence he came (I’m really trying not to give anything away here!). To an extent I have limited sympathy; he’s not new to Korea and knows very well how harsh their drugs laws came be (though the length of the potential sentence is probably shock), but it’s one moment of stupidity, and I don’t think he deserves to have his life ruined over it. He’s been behind bars for over a month now, the trials next week, and I found it difficult to write anything more meaningful than sympathy and a new update (he doesn’t get much contact with the outside world, apparently). I can’t imagine how he’s feeling now, and I really hope everything works out okay. The whole things made me think about life – imagine being behind bars in a prison with only one English language book to read (sadly we can’t send him more – perhaps worst of all, it’s a Dan Brown) and a very limited amount of Korean. Even if he does come proficient in the language, the best-case scenario is probably that he won’t have the chance to ever speak it in country again. Good luck to you Mr. X, my thoughts are with you.