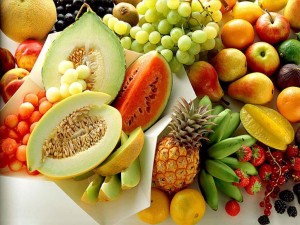 I’m not exactly the type to do a detox. I like my food too much, especially the kind of stuff that’s strictly forbidden when doing a detox. I watched a BBC Northern Ireland show the other day, though, about various people with deep-seated issues trying to overcome their problems whilst living in a house together. The best bit, by far, was the weird and wacky effects – including a bizarre sense of jubilation – that they all described when being made to do a fruit detox for three days. So I thought I’d do the same. I followed an online program, which dictated I was allowed one relatively fat-free piece of protein for dinner each day (chicken or fish), and otherwise I could only eat fruit or carbohydrate-free vegetables like mushrooms, onion and broccoli. And, sadly, not any potatoes, no extra flavorings like salt and absolutely no things with caffeine or alcohol in. Here’s how it went:

Day One: Day one was actually fine. It takes more than a day to get bored of fruit, and though the lack of carbohydrates did make me a bit hungry, a chicken breast for dinner almost sorted that out, as did a huge fruit salad (with nothing on it, so fruit, basically) for lunch. Sure, there were a few rumbles and a general sense that something was missing, but I did manage to walk to Ballsbridge and back to pick up a CD from Sony HQ (about 1hr 45 round trip), all without feeling any worse for it.

Day Two: It only takes me a day to get bored of fruit. So bored, in fact, that until dinner time on day two I chose not to eat anything except an apple, and a couple of glasses of fruit juice. I just couldn’t cope with any more colossal and unfulfilling fruit salads. The evening chicken was good that day, but I was very hungry. You learn to deal with, eventually, though I’m not sure I was much use at work, going for ‘drinks’ (orange juice) with the students and setting up material for my group classes next week. I hope Berlitz aren’t under the impression I’m some kind of dizzy, doped up weirdo now, I just hadn’t had any carbohydrate or coffee for two days, honest…

Day Three: Ouch. Three days on no carbohydrate whatsoever is not a nice experience, not at all. By early afternoon my stomach had started to seriously cramp up, and I contemplating giving up. Instead I went to bed for a couple of hours, downed more orange juice than is really a good idea, and started counting down until dinner time when I got to eat something that wasn’t fruit. By this point I was seriously bored of fruit, so much so that fish – which I’m generally not a massive fan of – tasted fantastic. In fact, after the fish I had the football to distract me, and not just any game either – Villa’s Carling Cup semi final against Blackburn, and what a game that was. At 2-0 down a felt like drowning myself in my pi… no wait, it was an orange juice. At 5-2 up the entire experience was pure elation, the Irish Villa fan club was singing their heart out, and I was sat their without a single pint in me, watching my team qualify for their first domestic final in ten years. Even Helena – who doesn’t exactly have love for football – was lapping it up. A mere three goals later, Villa had won 6-4, and two or three members of the fan club decided to utterly drench us in sparkling wine to celebrate. Villa go to Wembley, James ‘accidentally’ tastes a tiny amount of sticky sparkling wine from his fingers (that’s not cheating, is it?), two hours to go. That was a painful two hours.

The Aftermath: You’re supposed to wind down from a detox. You’re supposed to build up to it, really, too, but I didn’t really want to be eating oddly for any longer than necessary, and by the time the three days were up my resistance was gone. At a little after midnight I grabbed a take away battered sausage and chips, and I’ve never enjoyed a take out so much. My body craves a ludicrous amount of carbohydrate, though in a way I think I do feel healthier for it all, despite my stomach’s protests at having to deal with anything other than fruit and chicken. I’m sure it’ll get over it, though tea and coffee seem to go down particularly badly. I haven’t had any desire to drink alcohol – even a glass of wine –since, either. Ah well, weird experience, not sure it’s one I’ll be repeating.

Back to a normal diet!