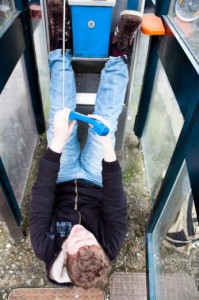 I know, I did this a full three weeks ago, but hey, I’m busy right now. It is, though, high time I gave you a quick overview of what actually happened. The basic idea was simple: spend ten hours standing by a phone box, tell as many people as possible about it and then field calls on whatever happened to interest them for the rest of the day. Considering we didn’t start promoting the idea until the Wednesday before the main event (which was on a Saturday), it went big pretty quickly. I interviewed on two different Irish radio stations (one twice), and the facebook group promoting things eventually grew to more than three hundred people ‘accepting’.

When I actually started out, though, I must admit I was worried it was going to flop. I only took around five calls in the first three hours, which is either a sign of just how hungover the average Irish person is on a Saturday morning (of those five calls, three were international – South Korea, Australia and Viet Nam), or a sign that I misjudged my timings and should have stood on a street corner later in the day. As the latter doesn’t appeal at all, I’ll go with the former.

I’ve spent the best part of the last week trying to edit a list of funny things that happened into a vaguely readable form, and (short of posting the article here and breaching my copyright agreement) I’m just not quite up to doing it again, so I’ll go with the summary. Stupid things that happen when you stand near a phone box for ten hours might (and in this case did) include the following:

• Several people call up pretending that they’re going to shoot your from a rooftop. There’s an easy way out of this one – ask them what you’re wearing. A few people picked up on the ‘Phone Booth’ similarities, though, and one blog even wrote a few comments suggesting I’m the new Colin Farrell. If only…

• A French woman asked me to think of twenty things that might have happened in the phone box in the past, and draw diagrams of each one. After that I found it pretty difficult to hang out inside the phone box, and so got a little damp. Damn her.

• Four different bands called. Criminally, I can’t remember the name of one of them. Two of them were Dublin bands – Ambiance Affair and Checker Board – and the final one (and final call of the day) came from We Need Surgery, a South Korean electro-pop band who I was utterly obsessed with when I lived out in Seoul. Best of all, they called to tell me they finished recording their debut album, and promising to send me one of the first copies. About time, it’s taken a full three years to complete!

• A nine year old girl calling to talk about holidays in Cyprus. Oddly, of all the 36 people who called me over the day, she was the only one who even thought to ask why. The answer? I couldn’t think of anything that would seem logical to a nine year old girl… 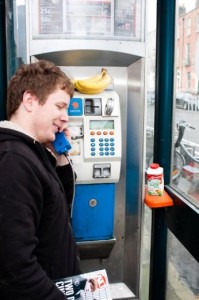 • It’s amazing how much attention a dog gets. I mentioned on the internet feed that one was tied to the base of the phone box at one stage. A couple of people called to try and claim it back.

• A guy called Dave called to explain the concept of ‘sexy crotch dancing’ and play me a melodica solo down the phone. He came across as genuinely weird and entertaining. Fair play.

• An ‘old lady’ calling to ask about her friend ‘Doris’. I eventually told her Doris had died of a heart attack. I’m 90% sure I know who this was, so I’m not too concerned that some strange old woman thinks her friend’s dead, but still, you never know…

• An entire, in depth, checkered history of a hot air balloon company I once worked for given by a gay Californian hot air balloon pilot based in Paris. You just couldn’t make that up. He doesn’t even like Paris.

• An entertaining call from a girl offering to cook me stir fry and lasagna and bring it to the phone box if I told her where it was. I thought she was creepy. Five minutes later I found out it was intentionally creepy and Helena put her up to it. Hilarious.

Stats: 36 calls in total from eight countries (UK, Ireland, Denmark, France, Holland, South Korea, Viet Nam and Australia). A total of around four hours on the phone, and not one single call based around mocking England’s loss in the rugby. The winning call in terms of distance came from Perth, Australia, and the other prize – which revolved around trying to find me based on online clues – stayed unclaimed, though one guy did work out where I was on the phone, but only ten minutes before the deadline. Unlucky. I spent a total of around 15 minutes on the radio, will have on Ireland-wide published article as a result (also in parts of the UK), and had five or six blog articles written about me, too. At least half a dozen people have told me they couldn’t get through.

An absolutely ridiculous day, and a great moment in the ‘traveling without moving’ vein which I’m trying to pursue while I calm down on the actual travel. I’m so busy right now that I’m weeks behind on this blog – I haven’t even written about Villa’s cup final loss yet, but it’s all coming. Eventually. If anyone actually comes back after this kind of oddity.

(The phone box experiment was completed on behalf of AU Magazine, and wouldn’t have been the same without their substantial promotional efforts. Thanks guys!)