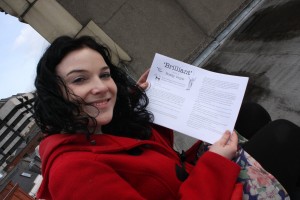 This is my third St Patrick’s Day in Dublin, but in I’ve never really celebrated it properly until this year. I’ve seen the parade, but tended to use the celebrations as a nice bit of a midweek time off, and taken it very easy. The best thing about it, in many ways, is the huge influx of high-class bands that always turn up over the week to be a part of the celebrations. On the other side, the city becomes absolutely crammed with tourists, you can barely get a drink in the pubs (which, to their credit, don’t really raise prices, but then again they’re high enough already) and Temple Bar is a no-go area for anyone who doesn’t plan to drink to the point of collapse or drown in a sea of leprechauns.

Still, this year’s was well worth the hassle. For a start, I took full advantage of the influx of great bands by seeing Gogol Bordello (who were absolutely superb, and we were given a ticket in the box overlooking the stage – bonus!), Two Door Cinema Club, 2 Many DJs and Mumford and Sons all inside four days. That was good enough, but with Helena’s office on the edge of the parade route, we also got a private viewing all the way down Dame Street – around five hundred metres of the parade straight in front of us without having to fight for a decent view. 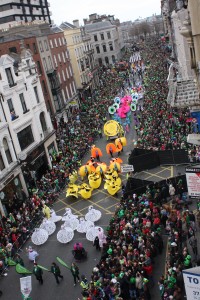 The entire parade this year was based on a purpose-written short story by Roddy Doyle (a real ‘Irish voice’ style local writer), which was frankly so awful that we couldn’t stand to read through more than three or four pages of it before the parade started (the fake confusion over which side of the country various cities were in was annoying to say the least). A shame, really, as he’s normally an interesting read. The parade itself, though, dropped a few of the brass bands that featured so heavily over the last couple of years and replaced them with more arty stuff, like three-headed dogs, people on stilts and plenty of sizable floats. The pictures probably say it better than I can, aside from to say that there was a lot of it (around 90 minutes), and it was surprisingly entertaining for the duration.

The crowd is as impressive as the parade itself, really, so sitting on top of the office roof and watching tens of thousands of people strain for a view and cheer as the thing passed by was quite an experience, especially with a bottle of champagne and a few beers throw in the mix. As soon as the parade’s over, all hell unfolds. We braved one or two of the quieter pubs to watch the ‘traditional’ music, the GAA finals and drink perhaps the best Guinness of the year (the high turnover around St Patrick’s seems to make it taste even better). We did drop in on The Purty Kitchen, one of Temple Bar’s big name pubs, too, but it was so rammed we only stayed for one beer and then headed off. 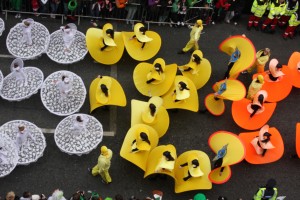 It’s easy to see both sides of the ‘love it/ hate it’ argument, really. In my experience more of the locals are sick of the day, the parade and the tourist influx it brings than actually enjoy it – loads go so far as to leave the city entirely – but then again, it does have its charms. Perhaps seeing it properly once in the time I live here is just about right, though it is a little sad seeing normally respectable Irish music pubs reduced to covers of ‘The Fields Of Athenry’ and ‘Dirty Old Town’ in the name of a huge tourist-pleasing night out. I’m cynical, but it must bring in a lot of money, and it’s much needed in the current economy.

It’s easy to be cynical, though, and not mention how good some of it is. I enjoyed it far more than I though I would, and cut out around 8pm to go and have a relaxing evening in front of a film. Given the havoc that seemed just over the horizon, that’s probably about the best way to do it. In Dublin, at least, St Patrick’s is perhaps the national celebration anywhere in the world that has the least to do with the locals. A good experience, but if we’re still here next year, I might look into doing one of those pilgrimages out in the sticks, and avoiding the tacky side of it all.

Another one ticked off that ‘to do’ list, though I never did find myself a green beer…