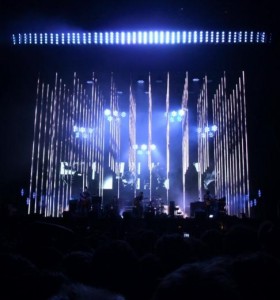 When you only have two weeks back home, you have to make the most of them. I’ve mostly been…

It’s been a few years since I went to Reading Festival – which in all honesty I’d started to find a tad childish (you’d understand if you spent an hour in the campsite) – but Radiohead were more than enough to draw me back. Well, Oxford’s finest and the chance to catch up with a few old friends and spend an entire day drinking beer and eating junk food.

I hadn’t seen Steve in about three or four years, but he’s one of those people that I feel like I’ve never been away from, and we can chat away like we were back at school. The same goes for Ant, so even though I didn’t catch up with Leanne and Rachel it was a great day. Radiohead were brilliant – and played Creep, a real live rarity – and I’ve also found a new musical love in Crystal Castles. Phenomenal live band, especially given they play exactly the kind of music I prefer to mock from a distance whilst making derogatory comments about DJs. Though that is fast changing; I have a newfound appreciation for all things electronic that’s growing by the day. I wont bore you with the details; if you’re a bit of a festival aficionado, click here for my full State Magazine Reading Festival review.

What shocked me most about Reading, though, is how bad the campsites are these days. I love the festival vibe, drinking round the camp fire, wandering around the paths and bumping into strangers, but Reading’s deteriorated into a dangerous, riotous place to be on the Sunday night. It was the closest thing I’ve ever been in to a battlefield: massive fires everywhere; security struggling to keep up with them while people chucked a relentless stream of deodorant cans and other explosives on them. I saw people standing in front of a fire engine throwing bottles at it to stop it getting to a fire, and another group wheeling the security company’s quad bike into one of the fires after the guard got off it. We walked over to another campsite, where an entire section of the campsite about 30 metres square had been burnt to a charred black square, and all the campers had left. Unreal, I doubt I’ll be back at Reading again. If I am, I won’t be staying for the Sunday night. I’ve heard a few people say ‘you can avoid it if you want to’, which may be true, but it seems more than a little beside the point.

Unsurprisingly, that left me with little sleep. I got the first train back from Reading in the morning, about 5.30am, and was a bit of a wreck when it came to the family reunion the next day. I think the last time we were all in the same room was Christmas, but a combination of a hangover and extreme tiredness meant I wasn’t in the best of form. In fact, I think my biggest contribution to the whole thing was eating my portion of the colossal leg of lamb. But we did get down to Bridget’s to see their very nice new house and have a BBQ a little later in the week, which made up for it a little.

On Saturday I went to see Salisbury City for the first time in about five years. In fact, last time I saw City, Saturday’s opponents Luton Town were playing in the Championship, and Salisbury were a Conference South team. Which means a four league difference between the two turned into a one all draw on Saturday. I was very impressed with Salisbury too, they’re a much stronger team now then I’ve ever seen before. Shame about the ten point deduction for going into administration this year: I think they’ll be safe from relegation despite it, but any chance of a play off and sneaking into the football league’s out of the window.

Saturday nights drinking session was fun too, bumping into old school Salisbury people and drinking beer with shots of tequila poured in it, as was wondering round Dickon’s ‘back garden’ and feeding celery to the smelly gypsy horses. Which makes for a decent hangover cure, actually.

It’s been a fun week, festival riots aside. Anyone else had that much trouble at festivals?

PS. On the off chance anyone is off to India… I’ve been back for two months now, and my stomach’s still playing up. It was the same first time too. I just thought you might enjoy that pleasant tit bit of information…