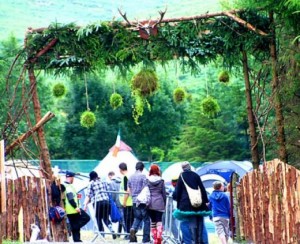 Try as I may, I just can’t avoid the obvious comparison with Knockanstockan. It’s a festival I randomly agreed to cover for State (review here), despite knowing only about half a dozen bands, as it just seemed like a lot of fun. The site overlooks a huge lake and is backed by some pretty impressive hills. Though it’s only about an hour from Dublin in County Wicklow, it’s a real pain to get to and the seclusion makes things a whole lot more interesting. There’s no more than one field, three different stages and a real green ethos focus to the whole thing. The music is highly genre unspecific, and unlike a lot of other festivals, Knockanstockan turns bands around in about 15 minutes and leaves plenty of overlap, so there’s always something to watch from mid morning all the way up to 3am the next day.

The similarities with Glastonbury are pretty clear right from the start. You can only buy a weekend ticket (which avoids the overly heady feeling that tends to come from daytrippers), there’s nothing at all in the way of commerical sponsorship and the entire thing is run by a group of people who started out running parties through their squat in a nearby town. Entry’s only 75 Euro for the entire weekend. As the bands are not particuarly well known, it’s as much about socializing, finding something you like and relaxing in the alternative areas of the site as actually watching music, though the music turned out to be pretty strong, too. 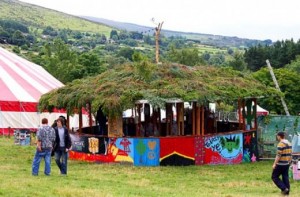 Abe, the State photographer (whose photos are attached to this entry, thanks Abe!) and I headed down after work on Friday night and immediately got stuck in to all the activities going on. In a way Knockanstockan feels like stepping back in time, as I’m sure the pictures show. The stages were tiny, with swirling floral patterns backing the bands and plenty of eco-focused stuff around the place. The Healing Area (see what I mean about Glastonbury!) had a whole load of information about injustices around the world, regular yoga and alternative therapy events and an extremely chilled out DJ running throughout the entire night. Beer was served in cans at no more than €2.50 each, and loads of little stalls provided things like Apple Shisha pipes and hoola hoops to mess around with. The heart of the site, around the stages, was pretty playful too, with loads of brightly colored art and even a field of mushrooms made out of painted umbrellas cropping up in the middle of the main stage. At most festivals, stuff like this would end up damaged by people in various states of inebriation by the end of the weekend, it just didn’t happen at Knockanstockan.

Musically, the highlights were the invariably brilliant And So I Watch You From Afar, Sounds Of System Breakdown’s late night show and Attention Bebe playing a whole load of 90s dance hits in an jazz/ soul style, which worked surprisingly well. The oddities were good, too, like a dad and his three sons opening the second stage on Sunday morning, and Hot Sprockets, perhaps the only Irish act determined to sound like they come from Tennessee. Above all, though, the atmopshere won out, with everyone being particularly friendly – I tried to walk into town one morning, not realizing how far it was, and was offered a lift within minutes. Lucky, as it would hvae taken about three hours.

I actually left the festival half way through for a few hours, as Aston Villa were playing in Dublin in a pre-season friendly, their first game in Ireland for about a decade. I’m pretty sure I’ll get over to a game or two this season, but seeing them play just down the road is the easiest chance I’m going to get. Of course, being a typical pre-season friendly, the quality was pretty shocking and Villa ended up losing 2-1 to Bohemians, who are the Irish champions (and not overly good), but still, all good fun. For the record, I’m not optimstic for the new season, and I think we’d do really well to hold onto sixth place after no transfer activity all summer, and with Milner almost certainly to leave. I hope I’m proved wrong.

Good weekend all round, anyway, and a festival I’ll definitely go back to, if only to compensate for missing Glastonbury yet again. Tune in soon for summer festival round three for this year!