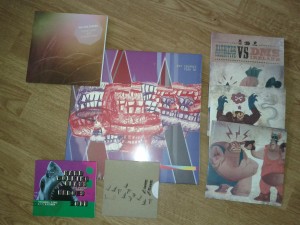 Hard Working Class Heroes has become one of the highlights of my musical calender. If there’s one thing I really love about Dublin above everything else, it’s without doubt the local music scene. It’s just so consistently high quality, and Hard Working Class Heroes is the best showcase on offer. The festival also feels like a real social event to me: whilst I go to so many  gigs now that it’s rare that I don’t know somebody down there – photographers, security and other writers more often than punters – Hard Working Class Heroes is the kind of event during which I can barely walk through a venue without seeing people I consider to be good friends. It’s the Irish music scene lover’s Irish music festival, effectively, with the added bonus that it’s held entirely within the city boundaries, so after drinking unnecessary amounts of Bulmers Berry (disgusting stuff, so much so that there’s a fairly small limit on how much I’ll drink even when it’s free, but I guess there had to be a down side) I can crawl back into my own bed.

Considering the callibre of top-notch Irish musicians missing from this bill, it really is incredible the level of music that I witnessed this weekend. The likes of Villagers, O Emperor, James Vincent McMorrow, ASIWYFA, Two Door Cinema Club, Halves, Rubberbandits… I could go on, are simply too big for an event like this, but that’s really the point – the chance to check out bands that aren’t normally hogging the music-page headlines. The sense of camaraderie is fantastic, too – I was dragged back stage by a band I won’t name to listen to an entire album of unmastered tracks they recorded only a few days before, and learnt about a few other up and coming things I’m really quite excited about. One venue had a triple give away vinyl with a few great tracks on it, and I blew a little bit more cash at the label market on the Saturday as there’s just so much stuff around here that’s grabbing me right now (see pic).

There are dozens of bands at HWCH I could rave about, some of which I didn’t even get the chance to see this weekend. Being in six places at once is beyond my magical (cough) powers, sadly, but of the ones I did see, I can pick out five that absolutely blew me away, and who I’d love to see step up to another level on the Irish music scene over the next few months. Of course, there are a few honorable mentions, too: Conor Walsh really impressed me again, but I raved about him last year. Sounds Of System Breakdown were a touch below par because of sound issues,  but even below par they’re one of the best bands in Ireland right now for me. I’ll just save another rave about them for another time. I also really loved Sleep Thieves, Last Days Of 1984 and The Violet Roadkills. These are the ones that really blew me away, though, and why…

Spies I’ve been hearing a fair bit about Spies for some time, but if I’m honest I just hadn’t found the time to check them out. They sound like a cross between Interpol and The National; seriously intense on the guitars and with those dank, dingy, slightly depressing vocals that come across so affecting. A stunning live show, and one that I watched in part because of the bands playing either side of them, so a massive bonus.

We Cut Corners When I get around to writing about music on this blog, and it’s something I plan on doing a lot more, this is a band I’m going to be raving about A LOT. The song writing is just incredible. When I interviewed them a few weeks back they talked a little about how they don’t like to read. Strangely I find that a real asset: the emotional side to the duos music just comes across so well live, and it’s so nicely and simply constructed. Having a combined drummer/singer has some serious novelty value (especially considering how good those vocals are), and even better, in tracks like ‘Dumb Blonde’ and ‘A Pirates Life’ they make me laugh without being cheesy. In fact I even feel touched by it. Then there’s stuff like ‘The Leopard’ which has a real White Stripes thing going on. I’ll stop raving now, suffice to say that I really, really love them.

Le Galaxie If you live in Dublin and I’m telling you something new talking about Le Galaxie, get down and see them now. The best thing about this show was that it matched the intensity of their album launch despite the fact it wasn’t actually their own show. Le Galaxie play the kind of electro rock with weirdly altered vocals that it’s just so easy to connect to, and go absolutely mental to down the front. I didn’t even feel like an idiot jumping around and pogo-ing, which for me is saying something. I’m not a huge fan of the album, if I’m honest, but live they’re something else.

Groom Having heard Groom’s album back when it came out a good few months ago, I went to see them and was a touch disappointed. They just didn’t add any edge to the album live at all – if anything they were weaker. They totally changed my mind on that today. I love how their lyrics deal with astute social observation as well as more every day things, and the singer Michael Stevens is quite a character.

Owensie Wow, what a character. Owensie is a bit odd, and I mean that in the most affectionate way possible. His final song today – also featured on that free vinyl I mentioned, and I’ve had it on repeat since – finally made sense when he explained it live. ‘Deep In The Eye’ is about a storm chaser who committed suicide after getting into the eye of a tornado and thinking life could never offer the same thrill again. At least that’s how I interpreted what he said, and I absolutely loved it. Michael Owens is both witty and lyrically weird and interesting, which is more than enough to grab me.