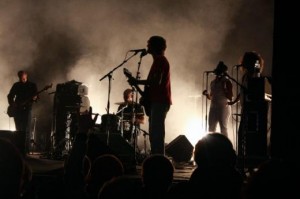 Apparently Galway is at its most lively during Arts Festival week. I wouldn’t know, having seen all of a few streets of it before now, but it certainly is an entertaining place to be. When the sun comes out the locals crash out by the riverside at Spanish Arch and drink, Key Street is so full it’s a challenge to walk down and the most popular pubs have to stop letting people in by about 10pm as they’re just too full. It’s fair to say I’m pretty impressed by the city so far. The only downside seems to be summer almost entirely bypasses this side of Ireland, but it’s a kind of antique beautiful, with a lively nightlife and affordable houses near the centre. Which already puts it streets ahead of Dublin in my eyes.

The first thing I made it too at the festival was the Friday night headline show from Spiritualized and Primal Scream, which I’d managed to get hold of some free tickets for in exchange for a State Magazine review. The Arts Festival main stage is a huge festival-like tent opposite the cathedral and next to the river, and has a festival like atmosphere too, though that may have had something to do with the bottles of Buckfast (a.k.a death the next day) that we’d drunk before heading in. 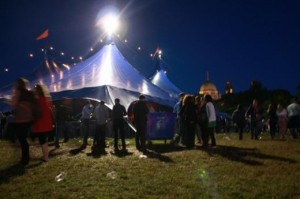 Spiritualized are a band that’ve always been on the periphery of my musical knowledge – I’ve caught up with them once or twice at festivals and been impressed, but never enough to go out and buy albums or go to their own gigs. They sound great, but the total lack of stage presence (they habitually stand in a circle and strum away, leaving the centre of the stage totally empty) puts me off. Primal Scream are a totally different story. Coming up to two centuries of live experience and they don’t seem to have lost any of the energy. Oddly ‘Country Girl’, which is only a couple of years old, is arguably stronger than their older stuff, at least live. Great set, one to sing down the bar afterwards.

We checked out some of the more artistic side of the festival, too, around the city’s various galleries. Most of it is rubbish, in all honesty – the usually stuff that large festival organizers use to fill up the programs and make the festival look much bigger than it actually is. The two photography exhibitions we went to, for example, were photographs of house walls in China and rural Ireland (by someone who things it’s artistically interesting that the two are fairly similar… oh dear), and a bunch of fairly non-descript portraits photographs of travelers in Cork (not bad, just dull and lacking any originality).

There was one stand out, though. A video exhibition by a Norwegian guy called Lars Laumann, who must be an absolute nut job, but came up with some really interesting ideas. The most bizarre of them was an extensive documentary on how Morrissey (lead singer of the Smiths, for the musically uneducated…) predicted the death of Princess Diana in one of his albums. Ridiculous, but perhaps the point was to shot where conspiracy theories come from. Another odd offering was a video in which all the actors moved backwards, but spoke forwards. The film was then reversed, leaving the actors looking like they’re moving forwards but speaking in mumbo-jumbo. Which apparently sounds like Swedish. All very creative, if a little pointless.

The best thing about the festival, though, was definitely the atmosphere, something that seems to have continued on a smaller scale through Galway race week. I hope the city still seems as interesting after all this!

Time to get on with the job search,