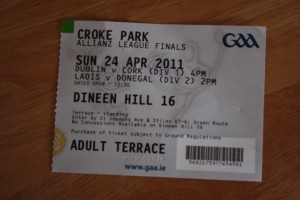 Seeing Dublin Gaelic Football Team play from the terraces of Hill 16 in Croke Park (“HQ”) is something I’ve been meaning to do since arriving in the city, so finally doing it for the final was something a bit special. Hill 16, though, is not the place to have an English accent. It’s an undeveloped terrace at one end of Croke Park stadium, and allegedly built from the rubble of the 1916 Easter rising, so perfectly suited to this particular weekend. It’s also the sight of numerous deaths at the hands of the English, most of them retaliation against defenseless civilians. The locals see it as so much of an essential ‘Dublin’ sight that one of the most commonly heard chants on the terrace – especially if anyone waves a flag from another county – is ‘Hill 16 is Dublin only’.

One of the best features of the Gaelic football finals is that there are almost always two games. This goes for the smaller games, too, with the ‘minor’ (underage) games typically taking place before the main event. While most of the crowd turn up just before the main event, seeing both makes the whole thing feel far better value for money to me.

Today’s first game was the Division Two final between Donegal and Laois (all Gaelic football sides on a national level are county sides, with the exception of London and New York, and the less said about the ability of those two, the better!). I’d gone down really early in the hope of getting a Hill 16 ticket (always the first choice – apart from anything else they’re quite a lot cheaper than the rest of the stadium, and the view looks a lot better from Hill 16, as the stadium feels complete – looking at Hill 16 makes it feel oddly half finished, despite the 82,500 capacity. The first game didn’t disappoint: Donegal went into a big lead with a couple of goals (note for those back home – worth three points compared to a rugby style kick, which is worth one), before Laois came back at the end and finally lost by just one point. 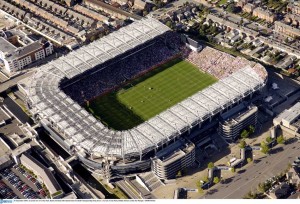 Everything was clearly all geared up for the final, though, which was Dublin against Cork. Cork are the reigning all Ireland champions and 2010 league champions (different competitions), and while Dublin last won the league championship nearly 20 years ago, they hadn’t been in the final for sometime. Strange, given the dominance of Dublin in terms of population. Hill 16 quickly filled up until it was absolutely crammed before kick off, when the two teams marched around the field behind a brass band to an absolutely rapturous reception from the terraces.

Dublin got off to a flyer, and soon found themselves a goal and a few points ahead. Early in the first half, a banner went up over Hill 16 protesting the Queen’s visit – ‘Never A Royal Welcome’ – though the security quickly took it down. I expected to feel a bit unwelcome, but I actually found as long as I made it clear I was behind Dublin (though in truth I didn’t care all that much either way), being English wasn’t all that much of an issue.

Still, typically of Dublin, they conspired to make an absolute mess of a dominant position. After watching the awful Aslan mime at half time (they’re still very famous in Ireland, apparently – 80s fans should spend some time in North Dublin!), Dublin quickly took an eight-point lead, and held it for a few minutes. Then their usual nerves kicked in, and suddenly the home team couldn’t kick a point I could have managed having never played the game before. They threw away an eight-point lead in the final twenty minutes to lose by one. Predictably, the Hill 16 crowd was absolutely livid with the team, and most of them walked out as soon as the final whistle went. 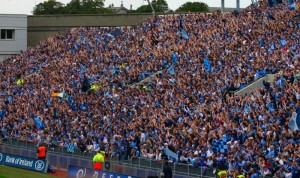 I’ve definitely got into watching GAA, especially the football (I find it too hard to follow the hurling, and less interesting), it’s something I’ll miss when we eventually make our way out of Ireland. If only Dublin weren’t so consistently awful when it counts, though technically I should really be supporting Mayo as that’s where Helena’s from. They have a similar reputation for making a mess of things when it really matters.

A great experience, though, Aslan aside. It’s great to see an entirely amateur sport so well followed.