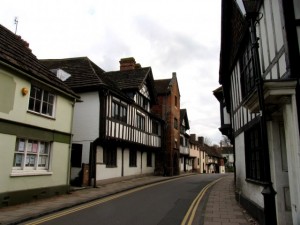 Dropping in on my grandparents and cousins always reminds me of being not quite a teenager; of Christmases, days in the attic playing Scaletric for an unhealthy length of time and munching on ludicrous quantities of donut-shaped biscuits or fondant fancies in the back of a car on the way to who knows where. It’s probably quite appropriate, actually, given that I can’t go anywhere near any member of my family with Helena, seemingly, without pictures of me wearing a sailors outfit (aged five, as opposed to a member of the village people), naked in the bath with countless cousins or gurning ridiculous with my toddler-era bleach blonde hair (natural, so I’m told) coming to the fore. Ouch.

I’d forgotten how quaintly English the Steyning area is. In amongst the superb hospitality (thanks guys!) we took a stroll down through a neighboring village – all wood-framed houses and rustic bridges – then over to Bramber Castle and down to the tiny little teahouse in Steyning, which looks like it’s important straight from about fifty years ago. Fantastically cute. 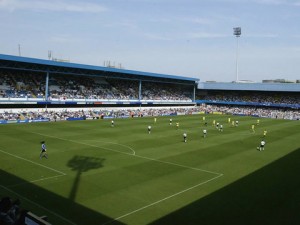 A day isn’t really long enough for any visit, to be honest, and we got the same amount of time in London, dropping in on Julie and Prinny, a couple of friends who moved over from Dublin just a few months back. Saturday night was predictably messy, lots of drinks in a Brixton pub, before Prinny and I headed for the QPR game on Sunday.

I haven’t been to enough live football recently, and with QPR looking likely to be in the premier league next season, they’re well worth checking out. Adel Taraab, their former Tottenham player on the left wing is the star, and he’s got plenty of class (scored a great goal after beating two coming off the wing), but struggles with the concept of passing. The atmosphere was good, QPR came back from 2-1 down to beat Coventry City (who were horrible, to be honest, and not helped by playing a convicted rapist up front – he got a predictably hostile reception), but it’s difficult to see them putting up much of a fight in the premier league with the team they have now.

It just highlights how little time we had that the only other things we managed to squeeze in were a trip to Spittalfield Market (full of hand made clothes and ornaments; I’m surprised I haven’t been before really, it’s more impressive than I expected) and a nice glance at Soho and China Town just before New Year (totally draped in those beautiful lanterns – we definitely have to get down to the events in Dublin over the next couple of weeks, it still reminds me a little of my time on Korea). The restaurants weren’t up to much when it came to service and actually heating the food beyond tepid, but you can’t have it all…

I always hear that London is expensive (and by all accounts it is hugely so rent wise), but in terms of the every day things I actually find it cheap compared to Dublin. Stocking up on CDs, music mags and whatever else grabs me is far more affordable than the equivalent in Ireland. Still, the various suggestions we should move over there do nothing for me, I can only see it staying as a nice play to drop in on. Perhaps in time for the 2012 Olympics would be nice…