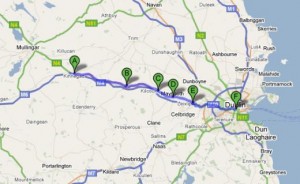 So after the previous day’s late-night search for a B&B, I’d left myself with precious little to do on the following day. Which was nice, in a way, as it meant I could chill out on the very soft bed (amazing what you can get for €35 in the sticks), do a bit of writing and eat a fat full Irish before I headed off in the morning. While 155kms the day before seemed fine until the final thirty kilometers or so, a quick look at my past two blog entries will tell you why the third day immediately really hurt.

And I mean really hurt. Things did get better as I went on, but the stiffness in my legs for the first hour was really nasty. Since I’ve been home, I’ve been sitting on soft things are avoiding walking anywhere I don’t have to, but nothing’s hurt as much as the first hour of the second day.

One of the problems with the area around Dublin is it’s really not very exciting, aesthetically. The farms are nothing like as quaint: they’ve all knocked down those charming little walls, and the bog land’s far behind in the midlands. There are sporadic corporations making use of the proximity to the capital, and really it’s just a bit of a slog. Still, there was no way I was going to make it nearly 3/4s o the way and then fall down on the last few kilometers, so on I slogged, through Kilcock (childish chuckle), Maynooth and Leixlip and then on into Palmerstown an the Dublin suburbs.

The route from Kinnegad onwards runs perfectly inline with the motorway, so most of the turnings and roundabouts are spent trying to avoid being directed onto the motorway itself. Eventually you have no choice, though by then there’s a nice off-road cycle path to follow alongside, which takes you into Dublin past the Houston Station. Aside from weaving around the canal and pushing through the various very suburban towns, there’s not a whole lot of interest – places like Leixlip have their charm, but it’s overwhelmed by the clunky presence of people like IBM on the outskirts. They’re hardly memorable.

I’ve spent the last few days moaning about being unable to walk up the stairs to our third floor apartment without being in serious pain, but it’s one less thing to do on my Ireland bucket list (which I’ll put up before too long), and it does give a genuine sense of achievement, even if the second day was a bit of a non-event. I’m thinking of heading north of Dublin on my next ride, perhaps exploring Slane Castle, Drogheda and some of the historic monuments and sights up that way.

Perhaps that’s one for after the wedding, though, as I’m off to Belfast for a few days with work, and things are looking up in terms of number of classes. In the meantime, time to book our honeymoon, order the wedding rings and pick out suits…